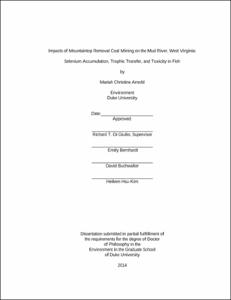 Selenium (Se) is a micronutrient necessary for the function of a variety of important enzymes; Se also exhibits a narrow range in concentrations between essentiality and toxicity. Oviparous vertebrates such as birds and fish are especially sensitive to Se toxicity, which causes reproductive impairment and defects in embryo development. Selenium occurs naturally in the Earth's crust, but it can be mobilized by a variety of anthropogenic activities, including agricultural practices, coal burning, and mining.

Mountaintop removal/valley fill (MTR/VF) coal mining is a form of surface mining found throughout central Appalachia in the United States that involves blasting off the tops of mountains to access underlying coal seams. Spoil rock from the mountain is placed into adjacent valleys, forming valley fills, which bury stream headwaters and negatively impact surface water quality. This research focused on the biological impacts of Se leached from MTR/VF coal mining operations located around the Mud River, West Virginia.

In order to assess the status of Se in a lotic (flowing) system such as the Mud River, surface water, insects, and fish samples including creek chub (Semotilus atromaculatus) and green sunfish (Lepomis cyanellus) were collected from a mining impacted site as well as from a reference site not impacted by mining. Analysis of samples from the mined site showed increased conductivity and Se in the surface waters compared to the reference site in addition to increased concentrations of Se in insects and fish. Histological analysis of mined site fish gills showed a lack of normal parasites, suggesting parasite populations may be disrupted due to poor water quality. X-ray absorption near edge spectroscopy techniques were used to determine the speciation of Se in insect and creek chub samples. Insects contained approximately 40-50% inorganic Se (selenate and selenite) and 50-60% organic Se (Se-methionine and Se-cystine) while fish tissues contained lower proportions of inorganic Se than insects, instead having higher proportions of organic Se in the forms of methyl-Se-cysteine, Se-cystine, and Se-methionine.

Additional experiments using biofilms grown in the Mud River showed increased Se in mined site biofilms compared to the reference site. When we fed fathead minnows (Pimephales promelas) on these biofilms in the laboratory they accumulated higher concentrations of Se in liver and ovary tissues compared to fathead minnows fed on reference site biofilms. No differences in Se accumulation were found in muscle from either treatment group. Biofilms were also centrifuged and separated into filamentous green algae and the remaining diatom fraction. The majority of Se was found in the diatom fraction with only about 1/3rd of total biofilm Se concentration present in the filamentous green algae fraction

Finally, zebrafish (Danio rerio) embryos were exposed to aqueous Se in the form of selenate, selenite, and L-selenomethionine in an attempt to determine if oxidative stress plays a role in selenium embryo toxicity. Selenate and selenite exposure did not induce embryo deformities (lordosis and craniofacial malformation). L-selenomethionine, however, induced significantly higher deformity rates at 100 µg/L compared to controls. Antioxidant rescue of L-selenomethionime induced deformities was attempted in embryos using N-acetylcysteine (NAC). Pretreatment with NAC significantly reduced deformities in the zebrafish embryos secondarily treated with L-selenomethionine, suggesting that oxidative stress may play a role in Se toxicity. Selenite exposure also induced a 6.6-fold increase in glutathione-S-transferase pi class 2 gene expression, which is involved in xenobiotic transformation. No changes in gene expression were observed for selenate or L-selenomethionine-exposed embryos.

The findings in this dissertation contribute to the understanding of how Se bioaccumulates in a lotic system and is transferred through a simulated foodweb in addition to further exploring oxidative stress as a potential mechanism for Se-induced embryo toxicity. Future studies should continue to pursue the role of oxidative stress and other mechanisms in Se toxicity and the biotransformation of Se in aquatic ecosystems.