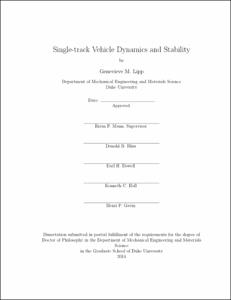 This work is concerned with the dynamics and stability of nonlinear systems that roll in a single track, including holonomic and nonholonomic systems. First the classic case of Euler's disk is introduced as an example of a nonholnomic system in three dimensions, and the methodology for deriving equations of motion that is used throughout this work is demonstrated, including use of Lagrange's equations, accommodating constraints with both Lagrange multipliers and with Gauss's Principle.

Next, a disk in two dimensions with an eccentric center of mass is explored. The disk is assumed to roll on a cubic curve, creating the possibility of well-escape behavior, which is examined analytically and numerically, showing regions of multi-periodicity and chaos. This theoretical system is compared to an experiment designed

to demonstrate the same behavior.

The remainder of the present document is concerned with the stability of a bicycle, both on flat ground, and on a type of trainer known as "rollers." The equations of motion are derived using Lagrange's equations with nonholonomic constraints, then the equations are linearized about a constant forward velocity, and a straight path, yielding a two degree of freedom system for the roll and steer angles. Stability is then determined for a variety of different parameters, exploring the roll of bicycle geometry and rider position, along with the effect of adding a steering torque, taking the form of different control laws.

Finally, the system is adapted to that of a bicycle on rollers, and the related equations of motion are derived and linearized. Notable differences with the classic bicycle case are detailed, a new eigenvalue behavior is presented, and configurations for optimal drum spacing are recommended.