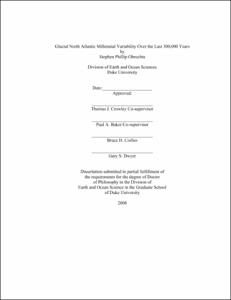 The hematite-stained grain (HSG) proxy method, commonly employed by the late G.C. Bond to detect the "1500-year cycle" in North Atlantic climate, is reproduced and veriﬁed for the ﬁrst time. The exact method is compiled from various sources and presented in Chapter 1. In Chapter 2, an HSG record from classic North Atlantic DSDP Site 609 is reconsidered. While the Site 609 HSG record was initially interpreted to exhibit 1500-year variability, it did not actually contain spectral power at the 1500-year band. The chronology for Site 609 is based on radicarbon dates to 26 ka, beyond which the sea surface temperature record is matched to the record of air temperature variations over Greenland from the GISP2 ice core. However, it is now evident that the lack of spectral power at the primary period of the observed ﬂuctuation was likely due to the GISP2 chronology, which has been subsequently shown to become progressively deﬁcient over the course of the last glaciation. Updating the Site 609 chronology to the latest chronology for the virtually complete NGRIP Greenland ice core, which is based on layer counting to 60 ka, results in 99% signiﬁcant spectral power at a 1/1415 year frequency.

In Chapter 3, the classic Site 609 lithic records are extended to the previous two glaciations, glacial Stages 6 and 8, at IODP Site U1308 (reoccupied Site 609). The "1500-year cycle" is not detected within Stage 6, perhaps indicating that D-O Events were not manifest in a similar fashion, if at all. Heinrich Event are also not detected, indicating relative stability of the North American Laurentide Ice Sheet during Stage 6. As a result, individual North Atlantic sites recorded lower-amplitude, asynchronous hydrographic changes. The SST proxy record at Site U1308 during Stage 6 primarily records intermediate temperatures. The subtle SST changes detected likely indicate local as opposed to basin-scale changes related to the migration of oceanic frontal boundaries. During Stage 6, benthic

δ13C changes are of lower amplitude than Stages 2 - 4 and correspond more strongly to variations in SST than to ice rafting, indicating that ice-rafting events did not as strongly inﬂuence NADW formation.

During Stage 8, however, well-structured cycles in HSG with a mean event spacing of ~ 1500 Â± 500 years are detected, potentially indicating a greater likelihood of D-O Events during Stage 8. In addition, three Heinrich Events, deﬁned by a large abundance of DC, occurred during MIS 8, indicating surging of the Laurentide Ice Sheet Ice Sheet. Stage 8 is therefore more analogous to that of the last glaciation than Stage 6.

Chapter 4 explores the link between HSG and cosmogenic nuclide production, which are highly coherent at a frequency of 1/950 years. A 950-year period is present in the HSG records of the last three glaciations. While a 950- year oscillation may be the product of solar forcing, due to uncertainty in paleomagnetic reconstructions and in the Site U1308 chronology, the null hypothesis that the HSG proxy does not reﬂect variable solar irradiance cannot be unequivocally refuted. Solar forcing does however provide an explanation for climate variability in the 950-year band during the last three glaciations.