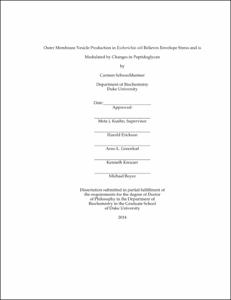 Bacterial outer membrane vesicles (OMVs) are spherical buds of the outer membrane (OM) containing periplasmic lumenal components. OMVs have been demonstrated to play a critical part in the transmission of virulence factors, immunologically active compounds, and bacterial survival, however vesiculation also appears to be a ubiquitous physiological process for Gram-negative bacteria. Despite their characterized biological roles, especially for pathogens, very little is known about their importance for the originating organism as well as regulation and mechanism of production. Only when we have established their biogenesis can we fully uncover their roles in pathogenesis and bacterial physiology. The overall goal of this research was to characterize bacterial mutants which display altered vesiculation phenotypes using genetic and biochemical techniques, and thereby begin to elucidate the mechanism of vesicle production and regulation. One part of this work elucidated a synthetic genetic growth defect for a strain with reduced OMV production (&#916;nlpA, inner membrane lipoprotein with a minor role in methionine transport) and envelope stress (&#916;degP, dual function periplasmic chaperone/ protease responsible for managing proteinaceous waste). This research showed that the growth defect of &#916;nlpA&#916;degP correlated with reduced OMV production with respect to the hyprevesiculator &#916;degP and the accumulation of protein in the periplasm and DegP substrates in the lumen of OMVs. We further demonstrated that OMVs do not solely act as a stress response pathway to rid the periplasm of otherwise damaging misfolded protein but also of accumulated peptidoglycan (PG) fragments and lipopolysaccharide (LPS), elucidating OMVs as a general stress response pathway critical for bacterial well-being. The second part of this work, focused on the role of PG structure, turnover and covalent crosslinks to the OM in vesiculation. We established a direct link between PG degradation and vesiculation: Mutations in the OM lipoprotein nlpI had been previously established as a very strong hypervesiculation phenotype. In the literature NlpI had been associated with another OM lipoprotein, Spr that was recently identified as a PG hydrolase. The data presented here suggest that NlpI acts as a negative regulator of Spr and that the &#916;nlpI hypervesiculation phenotype is a result of rampantly degraded PG by Spr. Additionally, we found that changes in PG structure and turnover correlate with altered vesiculation levels, as well as non-canonical D-amino acids, which are secreted by numerous bacteria on the onset of stationary phase, being a natural factor to increase OMV production. Furthermore, we discovered an inverse relationship between the concentration of Lpp-mediated, covalent crosslinks and the level of OMV production under conditions of modulated PG metabolism and structure. In contrast, situations that lead to periplasmic accumulation (protein, PG fragments, and LPS) and consequent hypervesiculation the overall OM-PG crosslink concentration appears to be unchanged. Form this work, we conclude that multiple pathways lead to OMV production: Lpp concentration-dependent and bulk driven, Lpp concentration-independent.