Due to her tender age: Black girls and childhood on trial in South Carolina, 1885-1920 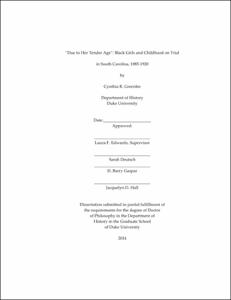 Drawing on local criminal court records in western and central South Carolina, this dissertation follows the legal experiences of black girls in South Carolina courts between 1885 and 1920, a time span that includes the aftermath of Reconstruction and the foundational years of Jim Crow. While scholars continue to debate the degree to which black children were included in evolving conversations about childhood and child protection, this dissertation argues that black girls were critical to turn-of-the century debates about all children's roles in society. Far from invisible in the courts and jails of their time, black girls found themselves in the crosshairs of varying forms of power --including intraracial community surveillance, burgeoning local government, Progressive reform initiatives and military policy -- particularly when it came to matters of sexuality and reproduction. Their presence in South Carolina courts established boundaries between early childhood, adolescence and womanhood and pushed legal stakeholders to consider the legal implication of age, race, and gender in criminal proceedings. Age had a complicated effect on black girls' legal encounters; very young black girls were often able to claim youth and escape harsher punishments, while courts often used judicial discretion to levy heavier sentences to adolescents and violent girl offenders. While courts helped to separate early childhood from the middle years, they also provided a space for African-American children and family to engage a legal system that was moving rapidly toward disenfranchising blacks.