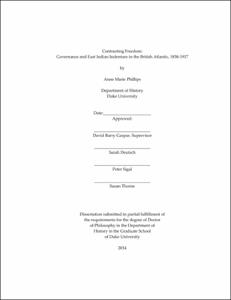 This is a dissertation about identity and governance, and how they are mutually constituted. Between 1838 and 1917, the British brought approximately half a million East Indian laborers to the Atlantic to work on sugar plantations. The dissertation argues that contrary to previous historiographical assumptions, indentured East Indians were an amorphous mass of people drawn from various regions of British India. They were brought together not by their innate "Indian-ness" upon their arrival in the Caribbean, but by the common experience of indenture recruitment, transportation and plantation life. Ideas of innate "Indian-ness" were products of an imperial discourse that emerged from and shaped official approaches to governing East Indians in the Atlantic. Government officials and planters promoted visions of East Indians as "primitive" subjects who engaged in child marriage and wife murder. Officials mobilized ideas about gender to sustain racialized stereotypes of East Indian subjects. East Indian women were thought to be promiscuous, and East Indian men were violent and depraved (especially in response to East Indian women's promiscuity). By pointing to these stereotypes about East Indians, government officials and planters could highlight the promise of indenture as a civilizing mechanism. This dissertation links the study of governance and subject formation to complicate ideas of colonial rule as static. It uncovers how colonial processes evolved to handle the challenges posed by migrant populations.

The primary architects of indenture, Caribbean governments, the British Colonial Office, and planters hoped that East Indian indentured laborers would form a stable and easily-governed labor force. They anticipated that the presence of these laborers would undermine the demands of Afro-Creole workers for higher wages and shorter working hours. Indenture, however, was controversial among British liberals who saw it as potentially hindering the creation of a free labor market, and abolitionists who also feared that indenture was a new form of slavery. Using court records, newspapers, legislative documents, bureaucratic correspondence, memoirs, novels, and travel accounts from archives and libraries in Britain, Guyana, and Trinidad and Tobago, this dissertation explores how indenture was envisioned and constantly re-envisioned in response to its critics. It chronicles how the struggles between the planter class and the colonial state for authority over indentured laborers affected the way that indenture functioned in the British Atlantic. In addition to focusing on indenture's official origins, this dissertation examines the actions of East Indian indentured subjects as they are recorded in the imperial archive to explore how these people experienced indenture.