Rebuilding the Common at the Border of the Nation: The Politics of Sans Papiers in Marseille 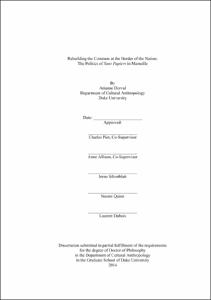 My dissertation traces undocumented migrants' experiences at the edge of Europe, as well as their struggles to emerge from the spatio-temporal void to which they are being increasingly confined. By providing an ethnographic account of sans papiers who live, work, and organize politically in Marseille, I show how undocumented mend and women in the border-city are being dislocated, depersonalized and devalued, and then account for the practices by which they seek to include themselves in the political community that refuses to see and hear them. In so doing, I elucidate the production and experience of exile in a city increasingly transformed by urban enclosure and the reconfiguration of (supra)national borders. I investigate moreover sans papiers' capacity to rupture, through a series of spontaneous and/or organized actions, the naturalized space-time of the neoliberal security state.

In my exploration of the sans papiers predicament, I deploy a dialectical political economy framework supplemented with a Badiousian reading of the political event. I examine how migrant `illegality' is produced at the juncture between capital and the state, and assign centrality to space and time as key (mediating) categories of migrant experience. In turn, I construe the political subjectivation of sans papiers as a negating gesture grounded, not in the desire for free circulation, but in the experience of radical lack. In so doing, I critically engage the most recent literature on irregular migration, as well as ongoing debates surrounding the common's enclosure and the contradictions of citizenship in the neoliberal moment.

My dissertation is organized around the following three questions: 1) How have recent transformations in Marseille's urban landscape and the European immigration regime reconstituted the space-time of undocumented migrants in the cosmopolitan port-city? 2) What novel subjectivities are emerging out of these processes? 3) How can sans papiers rebuild, if at all, the common at the border of a nation predicated on their simultaneous exclusion and exploitation? In answering these questions, my dissertation follows the experiential trajectory of migrants in Marseille from an (heterotopic) `off-place' to the `void of exile'--a shift produced by the neoliberal reorganization of labor and the reconfiguration of (supra)national borders in Europe. It also traces the formation of a `generic class' of overexploited workers who, in spite of contributing to building the new `global Marseille,' are deprived of the right to have rights, of any social visibility, and indeed of any future to speak of.

My dissertation argues that, in the moment they emerge from the void and onto the political scene, sans papiers dissolve (if only momentarily) the walls that keep them locked within a regime of invisibility/hypervisibility. They interrupt, moreover, the logic of circulation and accumulation that is driving the enclosure of Marseille's spatio-temporal common. Thus they point to the possibility of building--in a universalizing gesture--a radically different world: beyond papers, beyond value and towards radical equality.