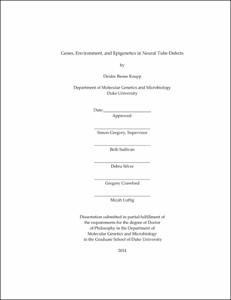 Neural tube defects (NTDs) are a common class of human birth defects with a complex, multifactorial etiology. Although many contributing factors have been identified, an estimated 60% of human population risk remains unexplained. A portion of that risk is likely attributable to gene-gene and gene-environment interactions which have yet to be fully elucidated. In one project, we used whole-exome sequencing to identify candidate genetic factors in a multiplex anencephaly family, revealing an aggregation of rare and common variants in planar cell polarity genes among the affecteds. In the second project, we profiled the methylomes of a pair of monozygotic twins discordant for anencephaly and identified several differentially methylated sites which could contribute to NTD risk, particularly the <italic>mir-886</italic> locus. Finally, we performed whole-exome and whole-methylome sequencing of mouse strains with differential susceptibility to fumonisin-induced NTDs, in combination with a human SNP association study. We identified epigenetic changes and variant associations which implicate Wnt and Hippo signaling genes as modifiers of the metabolic impacts of fumonisin exposure. These findings underscore the complexity of NTD pathogenesis and highlight the need to elucidate gene-gene and gene-environment interactions contributing to NTD etiology.