Explanatory Model for the Use of Traditional Medicines in Kilimanjaro, Tanzania 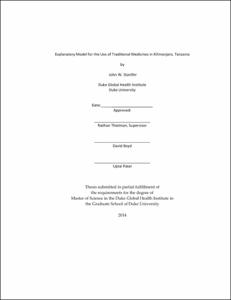 Introduction: Traditional medicines are one of the most important means of achieving total health care coverage globally, and their importance in Tanzania extends beyond the impoverished rural areas. Their use remains high even in urban settings among the educated middle and upper classes. They are a critical component healthcare in Tanzania, but they also can have harmful side effects. Therefore we sought to understand the decision-making and reasoning processes by building an explanatory model for the use of traditional medicines in Tanzania.

Methods: We conducted a mixed-methods study between December 2013 and June 2014 in the Kilimanjaro Region of Tanzania. Using purposive sampling methods, we conducted focus group discussions (FGDs) and in-depth interviews of key informants, and the qualitative data were analyzed using an inductive Framework Method. A structured survey was created, piloted, and then administered it to a random sample of adults. We reported upon the reliability and validity of the structured survey, and we used triangulation from multiple sources to synthesize the qualitative and quantitative data.

Results: A total of five FGDs composed of 59 participants and 27 in-depth interviews were conducted in total. 16 of the in-depth interviews were with self-described traditional practitioners or herbal vendors. We identified five major thematic categories that relate to the decision to use traditional medicines in Kilimanjaro: healthcare delivery, disease understanding, credibility of the traditional practices, health status, and strong cultural beliefs.