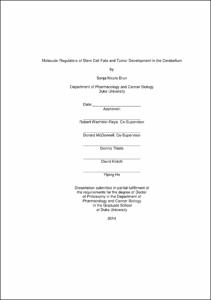 Medulloblastoma (MB) is a highly malignant brain tumor that occurs primarily in children. Although surgery, radiation and high-dose chemotherapy have led to increased survival, many MB patients still die from their disease, and patients who survive suffer severe long-term side effects as a consequence of treatment. Thus, more effective and less toxic therapies for MB are critically important. Identifying new treatments will require an understanding of early stages of tumor development - the cell types from which the tumors arise and the signals that regulate their growth - as well as identification of pathways that are critical for the growth and maintenance of established tumors.

In these studies, we first explore the role of WNT signaling in cerebellar progenitors and their potential to serve as cells of origin for WNT-driven tumors. The WNT pathway plays multiple roles in neural development, is crucial for establishment of the embryonic cerebellum, and is highly expressed in a subset of MBs. However, the cell types within the cerebellum that are responsive to WNT signaling remain unknown. We show that expression of activated &beta;-catenin promotes proliferation of cerebellar neural stem cells (NSCs) but not granule neuron precursors (GNPs). Although &beta;-catenin expressing NSCs proliferate <italic>in vivo</italic> they do not undergo prolonged expansion or neoplastic growth; rather, WNT signaling markedly interferes with their capacity for self-renewal and differentiation. At a molecular level, mutant NSCs exhibit increased expression of c-Myc, which might account for their transient proliferation, but also express high levels of bone morphogenetic proteins and the cyclin-dependent kinase inhibitor p21, which might contribute to their altered self-renewal and differentiation. These studies suggest that the WNT pathway is a potent regulator of cerebellar stem cell growth and differentiation and that cooperating "second hits" may be required for neoplastic transformation.

In addition to understanding early stages of transformation, identifying vulnerabilities of established tumors will be critical for development of targeted therapies. Our studies in Chapter 3 are focused on the role of Survivin in SHH-driven MB and utility of survivin inhibition as a therapeutic approach for MB. Survivin is an inhibitor of apoptosis protein (IAP) that regulates cell cycle progression and resistance to apoptosis, is frequently expressed in human MB, and when expressed at high levels predicts poor clinical outcome. Here we show that Survivin is overexpressed in tumors from <italic>patched</italic> (<italic>Ptch</italic>) mutant mice, a model of Sonic hedgehog (SHH)-driven MB. Using genetic and pharmacological approaches, we demonstrate that inhibition of Survivin impairs proliferation and survival of both murine and human MB cells. Although Survivin antagonists do not cross the blood-brain barrier, they are capable of impeding growth of MB cells in flank allografts. These studies highlight the importance of Survivin in SHH-driven MB, and suggest that it may represent a novel therapeutic target in patients with this disease.