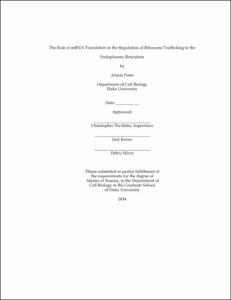 The goal of this research is to identify the trafficking patterns that direct ribosomes to the endoplasmic reticulum (ER). It is widely believed that the SRP pathway is the only mechanism that cells use to localize mRNA and ribosomes to the ER, but this has been found not to be a sufficient explanation for the patterns of RNA localization in cells, namely that non-signal sequence-containing mRNA are translated on the ER and that ribosomes retain their membrane association after translation termination. First, a summary of the history of the field is presented to provide context for the key, unanswered questions in the field. Then, experiments employing [32Pi] pulse-chase labeling of HeLa cells over a time course to follow nascent ribosome trafficking are presented. The purpose of the cell labeling was to track rRNA processing and assembly into nascent ribosomes, followed by their export into the cytoplasm and recruitment into active polysomes. A detergent-based cell fractionation procedure was also utilized to separate the cytosol and ER compartments in order to observe ribosomes on their path as they exit the nucleus and either localize to the ER or cytosolic cellular compartment. Through this method, it was seen that ribosomes appear in both compartments at the same time, suggesting a mechanism may be occurring in addition to SRP-dependent ribosome trafficking. This research provides an understanding toward a mechanism that is not currently known, but will one day more fully explain the patterns of ribosomal localization.