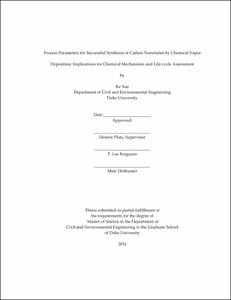 Manufacturing of carbon nanotubes (CNTs) via chemical vapor deposition (CVD) calls for thermal treatment associated with gas-phase rearrangement and catalyst deposition to achieve high cost efficiency and limited influence on environmental impact. Taking advantage of higher degree of structure control and economical efficiency, catalytic chemical vapor deposition (CCVD) has currently become the most prevailing synthesis approach for the synthesis of large-scale pure CNTs in past years. Because the synthesis process of CNTs dominates the potential ecotoxic impacts, materials consumption, energy consumption and greenhouse gas emissions should be further limited to efficiently reduce life cycle ecotoxicity of carbon naotubes. However, efforts to reduce energy and material requirements in synthesis of CNTs by CCVD are hindered by a lack of mechanistic understanding. In this thesis, the effect of operating parameters, especially the temperature, carbon source concentration, and residence time on the synthesis were studied to improve the production efficiency in a different angle. Thus, implications on the choice of operating parameters could be provided to help the synthesis of carbon nanotubes.

Here, we investigated the typical operating parameters in conditions that have yielded successful CNT production in the published academic literature of over seventy articles. The data were filtered by quality of the resultant product and deemed either "successful" or "unsuccessful" according to the authors. Furthermore, growth rate data were tabulated and used as performance metric for the process whenever possible. The data provided us an opportunity to prompt possible and common methods for practioners in the synthesis of CNTs and motivate routes to achieve energy and material minimization.

The statistical analysis revealed that methane and ethylene often rely on thermal conversion process to form direct carbon precursor; further, methane and ethylene could not be the direct CNT precursors by themselves. Acetylene does not show an additional energy demand or thermal conversion in the synthesis, and it could be the direct CNT precursors by itself; or at least, it would be most easily to get access to carbon nanotube growth while minimizing synthesis temperature. In detail, methane employs more energy demand (Tavg=883&#8451;)than ethylene (Tavg=766&#8451;), which in turn demands more energy than acetylene (Tavg=710&#8451;) to successfully synthesize carbon nanotubes. The distinction in energy demand could be the result of kinetic energy requirements by the thermal conversion process of methane and ethylene to form direct CNT precursors, and methane employs the highest activation demand among three hydrocarbons. Thus, these results support the hypothesis that methane and ethylene could be thermally converted to form acetylene before CNT incorporation.

In addition, methane and ethylene show the demand for hydrogen in thermal conversion process before CNT incorporation; whereas, hydrogen does not contribute to the synthesis via acetylene before CNT incorporation, except the reduction of catalyst. At relatively low hydrogen concentration, this work suggests that hydrogen prompts growth of carbon nanotubes via methane and ethylene, probably by reducing the catalysts or participating thermal reactions. In addition, "polymerization-like formation mechanism" could be supported by the higher growth rate of CNTs via ethylene than acetylene.

At last, high concentration of carbon source and hydrogen could cause more energy consumption, while it helps to achieve a high growth rate, due to the more presence of direct carbon precursor.