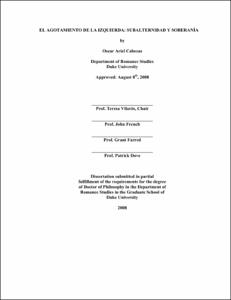 El agotamiento de la Izquierda: subalternidad y soberanÃ­a is a comparative project that examines the concept of political sovereignty in a variety of cultural texts in Latin America, including novels, essays and film. The dissertation defines sovereignty as an antagonistic space where the institution of nation-states and the development of capitalist modernization coincide. The dissertation examines basically four cases of social conflict in recent Latin American history where the concept of sovereignty is called into question: the Mexican Revolution (1910-20), the Cuban Revolution (1953-59), national populism in Argentina (1946-55) and the Popular Unity government in Chile (1970-73). The thesis argues for a new understanding of the relation between sovereignty and subalternity and also the relationship between literature and speculative late capitalism as an effect of the exhaustion of the interstate notion of sovereignty.