Continuity and Discontinuity: the Temple and Early Christian Identity 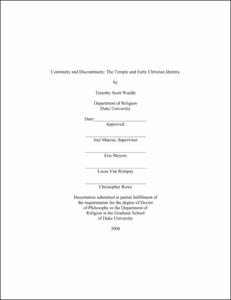 In Paul's first letter to the Corinthians, he asks the readers this question: "Do you not know that you are God's temple and that God's spirit dwells in you?" (1 Cor 3:16). Although Paul is the earliest Christian writer to explicitly identify the Christian community with the temple of God, this correlation is not a Pauline innovation. Indeed, this association between the community and the temple first appears in pre-Pauline Christianity (see Gal 2:9) and is found in many layers of first-century Christian tradition. Some effects of this identification are readily apparent, as the equation of the Christian community with a temple conveyed the belief that the presence of God was now present in this community in a special way, underlined the importance of holy living, and provided for the metaphorical assimilation of Gentiles into the people of God. Though some of the effects of this correlation are clear, its origins are less so.

This study contends that the early Christian idea of the Christian community as a temple should be understood in relation to the Jewish temple in Jerusalem. Moreover, this nascent Christian conception of the community as a temple should be seen in light of the existence of other Jewish temples which were established as alternatives to the one in Jerusalem: namely, the Samaritan temple on Mount Gerizim, the Oniad temple in Leontopolis, and the "temple of men" at Qumran. Though the formation of each temple was a complex affair, in each case the primary motivating factor appears to have been conflict with the Jerusalem religious establishment.

This work concludes that the application of temple terminology to the Christian community also developed through conflict with the Jerusalem chief priests charged with oversight of the temple, and that the creation of a communal temple idea should be understood as a culturally recognizable way to register dissent against the Jerusalem priesthood. As a result, we are better able to situate the early Christians in their originally Jewish nexus and see the extent to which tension in Jerusalem helped to forge the nascent Christian psyche.