Guilt and the War within: the Theater of Jean-Paul Sartre and Jean Giraudoux 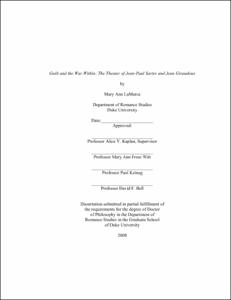 The moral and ethical choices made during the Nazi Occupation of France would echo for generations: they served as a source of pain and pride when the French sought to rebuild their national identity after the ignominy of the defeat, and acted as the foundation for the intellectual legacy on which post-war life stands.

In my dissertation I examine the diverse trajectory of two writers, Jean-Paul Sartre and Jean Giraudoux, during the Occupation by focusing on their dramatic works. During this period, no writer could legally exercise his vocation and receive compensation without submitting to certain legalities designed to monitor the content of artistic output. Therefore, any author who published did, at least in some small way, collaborate. This particular line in the sand has become blurred with time and usage. Critics and intellectuals, not to mention the legal system, have initially categorized artists' politics, then, when the boundaries (or public opinion) have shifted, they have chosen to reclassify. Collaborationist, resistant, or neutral - these three convenient labels cannot do justice to the vast array of colors in the Occupation-era landscape.

Writers, like the public at large, responded to the Occupation by becoming extreme collaborators, opportunists, simply earning their daily bread, or becoming fierce resistants, with an infinite number of various roles in between. Although critics have historically attempted to evaluate Jean-Paul Sartre's and Jean Giraudoux's actions in order to classify them as "resistant" or "collabo," this is a reductive act. Both men, like so many Frenchmen of this period, made an infinite number of small and large decisions that refracted their post-war image according to which critic held the prism. The historiography with regards to this era has dramatically changed. Must the manner in which we "categorize" these two authors not change accordingly?

With this question in mind, I have carefully studied the authors' primary texts (plays, essays, critiques, memoirs, and letters). In particular, I focus on their theatrical offerings: Les mouches, Huis clos, and La folle de Chaillot, as these are their best-known works of the era. Next, I examined biographies of the Sartre and Giraudoux (as well as other major historical, political, and literary figures) in order to gain as much background information as possible, and moreover, to identify both tendencies and discrepancies with regards to the authors. After this I sifted through the contemporary press related to these two authors, including theatrical reviews of their plays, their own publications in order re-evaluate the Occupation-era theatrical offerings of Sartre and Giraudoux. I have chosen to focus mainly on their plays from the era, as it those are their best-known works, and the those which had the most influence, in creating their political legacy and reputation during the Occupation. Finally, I applied the theories from contemporary historians - Robert Paxton, Henry Rousso, Philippe Burrin, and Gisèle Sapiro among others - in order to develop my own analysis of the theater of Sartre and Giraudoux and their post-war legacy.

Themes centering on guilt and condemnation abound during the war, especially in these three works. Fueled by De Gaulle's myths of an almost unilaterally resistant French population, the immediate post-war period focused on deliverance from an exterior enemy. However, contrary to popular interpretation, the plays in my corpus condemn the enemy within, the French betrayal of the French.