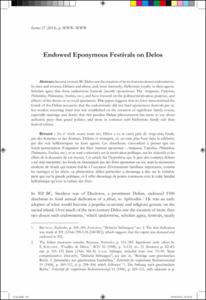 View / Download
679.5 Kb
Author
Sosin, JD
Repository Usage Stats
245
views
109
downloads
Abstract
Second-century BC Delos saw the creation of more than two dozen endowments, by men and women, Delians and aliens, and, most famously, Hellenistic royalty or their agents. Scholars agree that these underwrote festivals (mostly eponymous: The Antigoneia, Eutycheia, Philonideia, Ptolemaieia, Stesileia, etc.), and have focused on the political motivation, purpose, and effects of the dozen or so royal specimens. This paper suggests that we have misconstrued the Greek of the Delian accounts; that the endowments did not fund eponymous festivals per se, but modest recurring ritual that was established on the occasion of significant family events, especially marriage and death; that this peculiar Delian phenomenon has more to say about authentic piety than grand politics, and more in common with Hellenistic family cult than festival culture.
Type
Journal article
Permalink
https://hdl.handle.net/10161/9160
Collections
More Info
Show full item record Associate Professor of Classical Studies
Pronouns: he/him.One of the things that I like best about Classics is the wide range of intellectual opportunities it offers. As an undergraduate I was interested in early Christianity and Latin love elegy, which are about as far from my current work as you can get! But our discipline is built for roaming and many of its earliest greats would not fit neatly into the boxes that we use today. My