Red Lovers and Mothers on the Silver Screen: Hollywood’s Feminine Lens on the Soviet Debate from 1933-1945 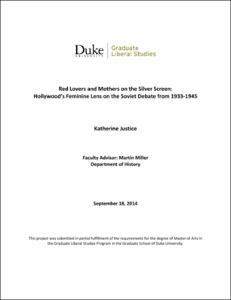 View / Download
1.6 Mb
Date
Author
Justice, Katherine
Advisor
Miller, Martin A
Repository Usage Stats
351
views
823
downloads
Abstract
The main goal of this thesis is to examine images of Russians in Hollywood film from 1933 to 1945, the years representing U.S. recognition of the U.S.S.R. through their WWII partnership as allies to the conclusion of the war. To narrow the focus of this study, films covered within this argument focus solely on images of Soviet-era Russian women. The woman plays an important role in these films, often standing as a metaphor for the Soviet nation and provides a useful trope to define the United States’ myth of nation, approach to foreign policy, and cultural understanding of the Russian people. I argue that Hollywood film feminized the image of Russia in film and defined her as the “Other” to help both justify the United States’ ideological fears and illustrate our desires for its political behavior on the body and actions of the female. Of primary importance to my argument are films such as Ninotchka, Comrade X, North Star, Song of Russia, and Days of Glory, which feature Russian women in two archetypal roles: as lover or mother. Following the argument that images of Russian women are tropes within these films that persist to this day, I explore how gender coding has helped restructure and reinforce structures of American society and history through a process of Americanizing the image and reinforcing the patriarchal power system of the United States. In this context, the lover and mother are actually not realistic representations of Russian ideology or culture but are evocative symbols that are employed to define “Otherness” of a foreign people in terms of the American status quo, reflect and to define the culture of the U.S. nation, and justify its political motives.
Type
Master's thesis
Department
Graduate Liberal Studies
Subject
American Studies; Cold War; gender; Hollywood film images of women; national identity; popular culture; Russians; sexuality; Soviet Union
Permalink
https://hdl.handle.net/10161/9178
Citation
Justice, Katherine (2014). Red Lovers and Mothers on the Silver Screen: Hollywood’s Feminine Lens on the Soviet Debate from 1933-1945. Master's thesis, Duke University. Retrieved from https://hdl.handle.net/10161/9178.
Collections
More Info
Show full item record