Dispersal in male ursine colobus monkeys (Colobus vellerosus): Influence of age, rank and contact with other groups on dispersal decisions 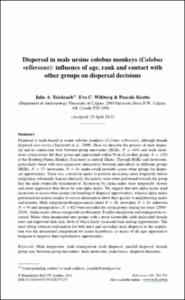 View / Download
351.3 Kb
Date
Authors
Teichroeb, JA
Wikberg, EC
Sicotte, P
Repository Usage Stats
181
views
284
downloads
Abstract
Dispersal is male-biased in ursine colobus monkeys (Colobus vellerosus), although female dispersal also occurs (Teichroeb et al., 2009). Here we describe the process of male dispersal and its connection with between-group encounters (BGEs, N = 444) and male incursions (when males left their group and approached within 50 m of another group; N = 128) at the Boabeng-Fiema Monkey Sanctuary in central Ghana. Through BGEs and incursions, particularly those with non-aggressive interactions between individuals in different groups (BGEs, N = 17; incursions, N = 4), males could probably assess other groups for dispersal opportunities. There was a trend for males to perform incursions more frequently before emigrating voluntarily than involuntarily. Incursions were often performed towards the group that the male eventually transferred to. Incursions by alpha males were temporally shorter and more aggressive than those by non-alpha males. We suggest that non-alpha males used incursions to assess other groups for breeding or dispersal opportunities, whereas alpha males performed incursions mainly to convey information about their quality to neighbouring males and females. Male emigrations/disappearances (natal N = 20, secondary N = 43, unknown N = 9) and immigrations (N = 62) were recorded for seven groups during ten years (2000- 2010). Alpha males always emigrated involuntarily. Parallel emigration and immigration occurred. Males often immigrated into groups with a more favourable adult male/adult female ratio and improved their rank, both of which likely increased their mating opportunities. The most fitting ultimate explanation for both natal and secondary male dispersal in this population was the intrasexual competition for mates hypothesis, as males of all ages appeared to emigrate to improve their reproductive opportunities. © 2011 Koninklijke Brill NV, Leiden.
Type
Journal article
Permalink
https://hdl.handle.net/10161/9187
Published Version (Please cite this version)
10.1163/000579511X577157
Publication Info
Teichroeb, JA; Wikberg, EC; & Sicotte, P (2011). Dispersal in male ursine colobus monkeys (Colobus vellerosus): Influence of age, rank and contact with other groups on dispersal decisions. Behaviour, 148(7). pp. 765-793. 10.1163/000579511X577157. Retrieved from https://hdl.handle.net/10161/9187.
This is constructed from limited available data and may be imprecise. To cite this article, please review & use the official citation provided by the journal.
Collections
More Info
Show full item record

Visiting Assistant Professor in the Department of Evolutionary Anthropology
Julie Teichroeb is a biological anthropologist who studies primate behavioral ecology. Her research focuses on the evolution of sociality, examining group formation, the underlying causes of social organization, and group decision-making. She is particularly interested in the relative influence of social and ecological pressures on the evolution of social organization; so how male and female reproductive strategies influence each other and result in the group size and group compositions that
This author no longer has a Scholars@Duke profile, so the information shown here reflects their Duke status at the time this item was deposited.