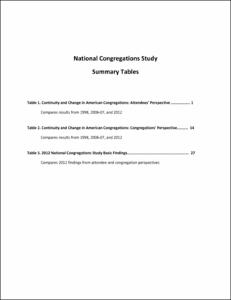 Files
Supporting information
188.6 Kb
Submitted version
419.9 Kb
Date
Authors
Chaves, MA
Anderson, SL
Repository Usage Stats
353
views
666
downloads
Abstract
© 2014 The Society for the Scientific Study of Religion.The third wave of the National Congregations Study (NCS-III) was conducted in 2012. The 2012 General Social Survey asked respondents who attend religious services to name their religious congregation, producing a nationally representative cross-section of congregations from across the religious spectrum. Data about these congregations were collected via a 50-minute interview with one key informant from 1,331 congregations. Information was gathered about multiple aspects of congregations' social composition, structure, activities, and programming. Approximately two-thirds of the NCS-III questionnaire replicates items from 1998 or 2006-2007 NCS waves. Each congregation was geocoded, and selected data from the 2010 U.S. Census or American Community Survey have been appended. We describe NCS-III methodology and use the cumulative NCS dataset (containing 4,071 cases) to describe five trends: more ethnic diversity, greater acceptance of gays and lesbians, increasingly informal worship styles, declining size (but not from the perspective of the average attendee), and declining denominational affiliation.
Type
Journal article
Permalink
https://hdl.handle.net/10161/9193
Published Version (Please cite this version)
10.1111/jssr.12151
Publication Info
Chaves, MA; & Anderson, SL (2014). Changing American Congregations: Findings from the Third Wave of the National Congregations Study. Journal for the Scientific Study of Religion, 53(4). pp. 676-686. 10.1111/jssr.12151. Retrieved from https://hdl.handle.net/10161/9193.
This is constructed from limited available data and may be imprecise. To cite this article, please review & use the official citation provided by the journal.
Collections
More Info
Show full item record Anne Firor Scott Distinguished Professor of Sociology
Professor Chaves specializes in the sociology of religion. Most of his research is on the social organization of religion in the United States. Among other projects, he directs the National Congregations Study (NCS), a wide-ranging survey of a nationally representative sample of religious congregations conducted in 1998, 2006-07, 2012, and 2018-19. NCS results have helped us to better understand many aspects of con