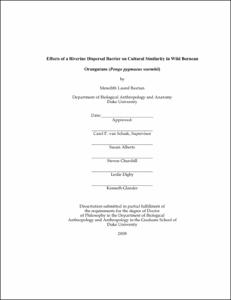 The study of culture in wild animals has received wide theoretical and empirical attention, providing preliminary evidence of at least rudimentary culture across a broad range of taxa. However, the majority of previous studies of animal cultural behavior have focused on demonstrating the existence of behavioral variants across study sites, armed only with an assumption that ecological and genetic alternatives are unlikely to sufficiently explain observed geographic variation in behavior. Moreover, previous studies have reported the presence of behavioral variation at the level of the population, without first confirming the presence of such variation in individual repertoires, which could create artificial patterns within or between populations.

Using more rigorous methods than previous studies, I examined rarely tested alternatives to field-based claims of cultural repertoire variation based on ecological heterogeneity and genetic variation. This dissertation relies on a natural experiment to compare two wild orangutan populations. Sungai Lading, a previously unstudied, high-density population of wild Pongo pygmaeus wurmbii, was compared to Tuanan, a P.p.wurmbii population separated from Sungai Lading by an impassable river barrier, but ranging in a broadly similar habitat. Preliminary genetics results indicate that at least some individuals from both sites cluster in the same mitochondrial subclade and that low levels of gene flow must have occurred between the two sites. Even after applying rigorous controls for variation in sampling intensity for individual orangutans, several differences in innovative behaviors exhibited at each site were identified, many of which occurred in the nesting context.

The orangutan is a model taxon for such an investigation, because wild populations exhibit a wide range of sociality, which has been linked to opportunities for social learning. Comparisons between the Tuanan and Sungai Lading populations indicated that cultural variants observed at only one site clustered significantly by population, although only dietary differences were unique at both sites. Orangutans at Sungai Lading maintain significantly lower rates of female-female association and lower individual repertoire sizes of putative cultural variants, a result that is consistent with the possibility that the orangutans of Sungai Lading may have reduced opportunities for social learning as a result of severe population compression, which could constrain opportunities for cultural transmission of key innovative behaviors.

From a broader perspective, the patterns revealed in this study strongly suggest that the last common ancestor of Homo and Pongo shared culturally modified behavior. They further suggest that the extent of cumulative cultural behavior in humans may surpass that of orangutans as a result of lost opportunities for social transmission, owing to varying degrees of limited association among group members.