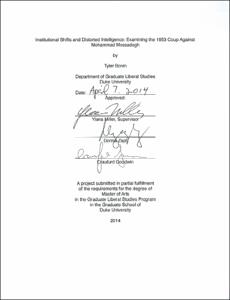 View / Download
468.1 Kb
Date
Author
Bonin, Tyler
Advisor
Miller, Ylana
Repository Usage Stats
544
views
774
downloads
Abstract
This paper examines the role of the National Security Council (NSC) and the Central Intelligence Agency (CIA) in the coup against Iran’s democratically elected Prime Minister, Mohammad Mossadegh, in 1953. Specifically, this paper argues that an expansion and redefinition of the NSC under Eisenhower ultimately led the CIA to overthrow Mossadegh, thus shifting the U.S. Intelligence Community from a primary focus on analysis to a prioritization of operations. To support this claim, this paper discusses major turning points in the development and growth of the NSC and CIA within the context of the Cold War. Furthermore, by looking at the history of oil exploitation in Iran, this paper connects the expansion of the NSC and CIA to a distortion and misinterpretation of facts surrounding Iranian oil nationalization, which further stoked fears of Soviet expansion and encouraged an operational response by the United States.
Type
Master's thesis
Department
Graduate Liberal Studies
Permalink
https://hdl.handle.net/10161/9232
Citation
Bonin, Tyler (2014). Institutional Shifts and Distorted Intelligence: Examining the 1953 Coup Against Mohammad Mossadegh. Master's thesis, Duke University. Retrieved from https://hdl.handle.net/10161/9232.
Collections
More Info
Show full item record