The Roots of Jazz in North Carolina 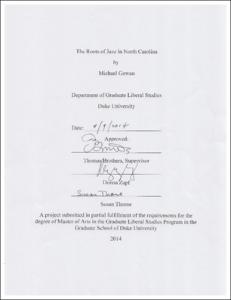 View / Download
2.1 Mb
Date
Author
Gowan, Michael
Advisor
Brothers, Thomas D
Repository Usage Stats
301
views
399
downloads
Abstract
Several of the most influential jazz artists of the 20th century were born or raised in North Carolina, including Thelonious Monk, Max Roach, John Coltrane, Nina Simone, and Lou Donaldson. But North Carolina isn’t known for jazz. In what ways did the state influence these native jazz musicians? In this paper, I delve into key musical traditions of North Carolina in the 19th and early 20th centuries, both sacred and secular forms, to reveal aspects of the influence that North Carolina had on their music, and by extension, on jazz music on the whole. Taken together, the musical styles I highlight—string band music, lining out, Piedmont blues, and shout band music—demonstrate common characteristics of rhythmic drive and emotional energy that would have deeply influenced any African-American musician in the state. While these elements aren’t unique to North Carolina music, we can’t discount the impact that the music, along with other aspects of life in the state, would likely have had on the musicians who lived here.
Type
Master's thesis
Department
Graduate Liberal Studies
Permalink
https://hdl.handle.net/10161/9235
Citation
Gowan, Michael (2014). The Roots of Jazz in North Carolina. Master's thesis, Duke University. Retrieved from https://hdl.handle.net/10161/9235.
Collections
More Info
Show full item record