Solution Aversion: On the Relation Between Ideology and Motivated Disbelief 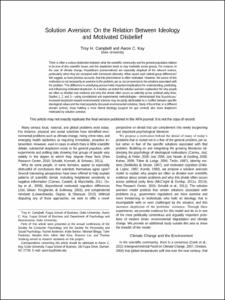 View / Download
497.5 Kb
Date
Authors
Campbell, T
Kay, A
Repository Usage Stats
2,275
views
17,512
downloads
Abstract
There is often a curious distinction between what the scientific community and the general population believe to be true of dire scientific issues, and this skepticism tends to vary markedly across groups. For instance, in the case of climate change, Republicans (conservatives) are especially skeptical of the relevant science, particularly when they are compared with Democrats (liberals). What causes such radical group differences? We suggest, as have previous accounts, that this phenomenon is often motivated. However, the source of this motivation is not necessarily an aversion to the problem, per se, but an aversion to the solutions associated with the problem. This difference in underlying process holds important implications for understanding, predicting, and influencing motivated skepticism. In 4 studies, we tested this solution aversion explanation for why people are often so divided over evidence and why this divide often occurs so saliently across political party lines. Studies 1, 2, and 3— using correlational and experimental methodologies— demonstrated that Republicans’ increased skepticism toward environmental sciences may be partly attributable to a conflict between specific ideological values and the most popularly discussed environmental solutions. Study 4 found that, in a different domain (crime), those holding a more liberal ideology (support for gun control) also show skepticism motivated by solution aversion.
Type
Journal article
Permalink
https://hdl.handle.net/10161/9256
Published Version (Please cite this version)
10.1037/a0037963
Publication Info
Campbell, T; & Kay, A (2014). Solution Aversion: On the Relation Between Ideology and Motivated Disbelief. Journal of Personality and Social Psychology, 107(5). pp. 809-824. 10.1037/a0037963. Retrieved from https://hdl.handle.net/10161/9256.
This is constructed from limited available data and may be imprecise. To cite this article, please review & use the official citation provided by the journal.
Collections
More Info
Show full item record J. Rex Fuqua Distinguished Professor of International Management
Aaron C. Kay (PhD 2005, Stanford University) is the J Rex Fuqua Professor of Management and Professor of Psychology & Neuroscience at Duke University. His research focuses on the relation between motivation, implicit social cognition, and social issues. He has a particular interest in how basic motivations and needs manifest as specific social and societal beliefs. These include (but are not limited to) the causes and consequences of stereotyping and system justification, religious belief