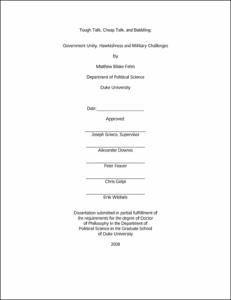 A number of puzzles exist regarding the role of domestic politics in the likelihood of international conflict. In particular, the sources of incomplete information remain under-theorized and the microfoundations deficient. This study will examine the role that the unity of the government and the views of the government towards the use of force play in the targeting of states. The theory presented argues that divided dovish governments are particularly likely to suffer from military challenges. In particular, divided governments have difficulty signaling their intentions, taking decisive action, and may appear weak. The theory will be tested on a new dataset created by the author that examines the theory in the context of international territorial disputes. A number of significant findings emerge from the data. First, divided governments are significantly more likely to face challenges and increasing government unity markedly decreases the likelihood of a challenge. Second, unified hawkish governments were far less likely to be the targets of challenges than divided dovish governments. Finally, the substantive impact of key variables was much greater than that of the control variables. The causal process postulated in the theory is examined in eight case studies, two for each of the four government types. These case studies show that government type not only impacts the signaling of democratic states but also influences the perceptions of potential challengers.