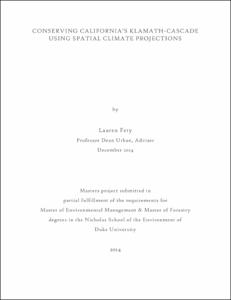 View / Download
2.5 Mb
Date
Author
Fety, Lauren
Advisor
Urban, Dean
Repository Usage Stats
329
views
336
downloads
Abstract
Global climate change complicates long-term conservation of forests. To be effective into the future, conservation efforts need to consider potential global change impacts and the ability of plants and animals to adapt. In northern California’s Klamath-Cascade region projected changes are heterogeneous across the complex landscape. Understanding future conditions can guide climate adaptation actions. The objective of this project is to support climate-smart conservation in the Klamath-Cascade through a spatially explicit analysis. The analysis searches for areas which have the highest likelihood of successful forest conservation in the uncertain future. In particular, the project looks at climate variability, tree species composition, and northern spotted owl habitat. It uses existing climate data and species envelope models to understand the long-term durability of the Klamath-Cascade. Within the region, it is likely that areas with smaller magnitudes of change will have future climatic conditions more favorable to species persistence. These areas are desirable for long-term conservation and protection of the plants and animals in the Klamath-Cascade. To identify areas desirable for species persistence, I used likelihood data from ten tree species climate envelope models to assess the similarity of current and future tree species composition. I also assessed the similarity of current precipitation and temperature variables to projected conditions. I found that many areas of the Klamath-Cascade will experience novel climate conditions by 2060. Some areas will experience considerably more warming and loss of precipitation than others. However, there are also significant portions of the region that have an overlap of current and future species climate envelopes, indicating similar current and future vegetation communities. I found that less than half of the areas identified for mature forest and northern spotted owl protection will remain in climatic conditions that are suitable. These findings can be helpful in identifying projects that are likely to sustain and conserve species of concern in the Klamath-Cascade.
Type
Master's project
Department
Nicholas School of the Environment and Earth Sciences
Subject
forestry
conservation
Klamath-Cascade
geospatial analysis
climate change
Permalink
https://hdl.handle.net/10161/9290
Citation
Fety, Lauren (2014). Conserving California’s Klamath-Cascade Using Spatial Climate Projections. Master's project, Duke University. Retrieved from https://hdl.handle.net/10161/9290.
Collections
More Info
Show full item record