The Legalization of Marijuana: An Analysis of Primary and Secondary Narratives of Mainstream Media Coverage 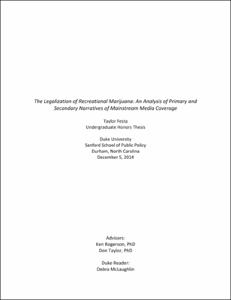 View / Download
1.1 Mb
Date
Author
Festa, Taylor
Repository Usage Stats
1,157
views
1,910
downloads
Abstract
Every country in the world has long outlawed marijuana production and consumption. Historically, some nations pursued a more lenient policy of decriminalization of possession, but even so marijuana is still globally regarded as an illegal substance with highly addictive and dangerous properties. The so-called American “War on Drugs”, as coined by President Richard Nixon in 1973, has been embraced by countries all over the world as the answer to drug violence, addiction and illegal trade. Most importantly, the “War on Drugs” embraces a prohibition policy, outlawing all aspects of production, trade and consumption. Colorado, Washington and the country of Uruguay have all defied the accepted, global stance against marijuana by pursuing a policy of legalization. All three governments have distinctive designs, yet share a similar goal of reducing the negative consequences or externalities marijuana prohibition imposes upon society. Not only is a policy of legalization in complete contradiction to the widely held belief that marijuana should be banded, but this policy also directly opposes American federal law as well as the United Nation’s stance on drug prohibition. Due to the controversy surrounding this policy and the resulting tension within public discourse, the media has extensively covered legalization in Colorado, Washington and Uruguay. But because all three governments differ in design, implementation and even policy results, the media coverage among the three cases varies greatly. As a result of these disparities, public discourse surrounding each particular case study is unique and distinctive from the rest of the world. Understanding public discourse surrounding legalization is just the beginning step in an even larger project of social science to discern how the media shapes public discourse on policy. The legalization of marijuana has amassed a series of unique narratives that distinguish public discourse of this policy from all other previous examples of drug media narration on both a domestic and international level.
Type
Honors thesis
Department
Public Policy Studies
Subject
Drug Policy
Marijuana Legalization
Marijuana Media Narratives
Legalization Narratives
Media Narratives Drug Policy
Drug Narratives
Permalink
https://hdl.handle.net/10161/9298
Citation
Festa, Taylor (2014). The Legalization of Marijuana: An Analysis of Primary and Secondary Narratives of Mainstream Media Coverage. Honors thesis, Duke University. Retrieved from https://hdl.handle.net/10161/9298.
Collections
More Info
Show full item record