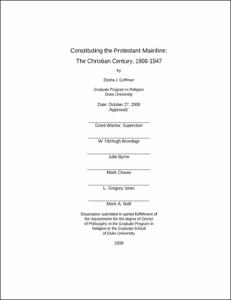 Scholars, journalists, and religious leaders in the twentieth century widely hailed The Christian Century as the most influential Protestant magazine in America. This dissertation investigates the meaning of such praise. In what ways, and upon whom, did the Century exercise influence? Answering this question directs attention not only to the Century's editorial content but also to the cultural role of magazines and the makeup of the Century's audience, an elite group of white American Protestants who had no collective name for the first half of the twentieth century but came to be called the Protestant mainline.

I focus on the editorial tenure of Charles Clayton Morrison, who bought an obscure Disciples of Christ periodical at a sheriff's sale in 1908 and transformed it, over the next 39 years, into the flagship magazine of liberal Protestantism. Attending to the Century's history as well as its rhetoric, I find that the magazine had a deep effect on its readers but a limited effect on American Protestantism as a whole. Most American Protestants never read the Century or accepted its theologically and politically liberal messages. The mainline, while certainly powerful, was never mainstream.

Studying the Century reveals how the mainline evolved in terms of membership levels, core emphases, and posture vis-à-vis other religious traditions. Likewise, the Century clarifies the role of the mainline as the dominant Protestant tradition in America. If dominance is understood to mean control of positions of power, a plausible case can be made for the dominance of both the mainline writ large and of the subset of this group who read The Christian Century. If dominance has anything to do with numerical preponderance, however, or with the ability to build consensus around key ideals, the supremacy of the mainline should be reexamined.

Lofty estimates of the Century's influence presuppose a transmission model of communication in which the primary role of a periodical is to convey information that alters readers' thinking. The Century did convey information to its readers, but the greatest service the magazine performed was to confirm readers' identity as central figures in the growth of what its editors deemed a vital, progressive, but by no means universally accepted form of Christianity. The Century spoke to its 35,000 readers more than it spoke for them, and those readers frequently felt like members of a beleaguered minority rather than a triumphal majority.

Throughout its upward climb, the Century's rhetoric ran ahead of its accomplishments. Without ever amassing a wide readership, it declared itself the rightful representative of American Protestantism. The Century's rhetoric of unified, progressive, and culturally dominant Protestantism proved compelling, but it obscured many complexities. Examining the Century's struggles to define itself and remain financially viable in its formative years brings to light the difficulties inherent in any attempt to lead America's fractious Protestants.