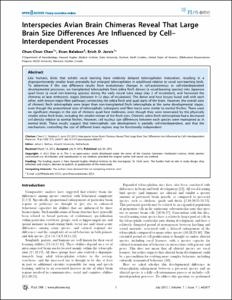 View / Download
2.3 Mb
Date
Authors
Chen, Chun-Chun
Balaban, Evan
Jarvis, Erich D
Repository Usage Stats
183
views
210
downloads
Abstract
Like humans, birds that exhibit vocal learning have relatively delayed telencephalon maturation, resulting in a disproportionately smaller brain prenatally but enlarged telencephalon in adulthood relative to vocal non-learning birds. To determine if this size difference results from evolutionary changes in cell-autonomous or cell-interdependent developmental processes, we transplanted telencephala from zebra finch donors (a vocal-learning species) into Japanese quail hosts (a vocal non-learning species) during the early neural tube stage (day 2 of incubation), and harvested the chimeras at later embryonic stages (between 9-12 days of incubation). The donor and host tissues fused well with each other, with known major fiber pathways connecting the zebra finch and quail parts of the brain. However, the overall sizes of chimeric finch telencephala were larger than non-transplanted finch telencephala at the same developmental stages, even though the proportional sizes of telencephalic subregions and fiber tracts were similar to normal finches. There were no significant changes in the size of chimeric quail host midbrains, even though they were innervated by the physically smaller zebra finch brain, including the smaller retinae of the finch eyes. Chimeric zebra finch telencephala had a decreased cell density relative to normal finches. However, cell nucleus size differences between each species were maintained as in normal birds. These results suggest that telencephalic size development is partially cell-interdependent, and that the mechanisms controlling the size of different brain regions may be functionally independent.
Type
Journal article
Subject
Animals
Brain
Finches
Immunohistochemistry
Permalink
https://hdl.handle.net/10161/9302
Published Version (Please cite this version)
10.1371/journal.pone.0042477
Publication Info
Chen, Chun-Chun; Balaban, Evan; & Jarvis, Erich D (2012). Interspecies avian brain chimeras reveal that large brain size differences are influenced by cell-interdependent processes. PLoS One, 7(7). pp. e42477. 10.1371/journal.pone.0042477. Retrieved from https://hdl.handle.net/10161/9302.
This is constructed from limited available data and may be imprecise. To cite this article, please review & use the official citation provided by the journal.
Collections
More Info
Show full item record