Low frequency of paleoviral infiltration across the avian phylogeny. 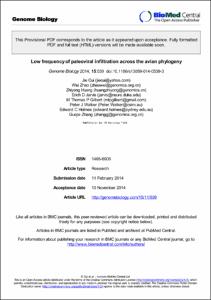