Can Genetics Predict Response to Complex Behavioral Interventions? Evidence from a Genetic Analysis of the Fast Track Randomized Control Trial. 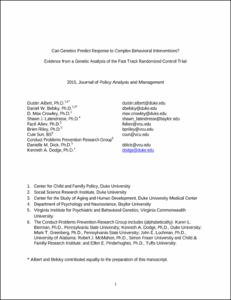 Assistant Professor in Population Health Sciences
The goal of Dan’s work is to reduce social inequalities in aging outcomes in the US and elsewhere. Dan's research seeks to understand how genes and environments combine to shape health across the life course. His work uses tools from genome science and longitudinal data from population-based cohort studies. The aim is to identify targets for policy and clinical interventions to promote positive development in early life and extend healthspan.Areas of interest: Aging, health William McDougall Distinguished Professor of Public Policy Studies
Kenneth A. Dodge is the William McDougall Distinguished Professor of Public Policy and Professor of Psychology and Neuroscience at Duke University. He is also the founding and past director of the Center for Child and Family Policy, as well as the founder of Family Connects International.  Dodge is a leading scholar in the development and prevention of aggressive and violent beha
Alphabetical list of authors with Scholars@Duke profiles.