Anti-Americanism in Pakistan: An Analysis of Pakistani Elite Opinions Regarding the United States and Drone Strikes in 2010 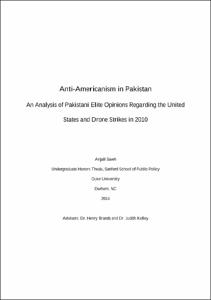 View / Download
677.1 Kb
Date
Author
Sawh, Anjali
Repository Usage Stats
428
views
1,042
downloads
Abstract
In 2010, 122 drone strikes occurred in the Federally Administered Tribal Areas of Pakistan, resulting in 849 civilian and militant casualties. Although the Pakistani government did little to protest against the use of drones, Pakistani elite opinion was complex in its response to both America and drone strikes. This paper argues that drone strikes made Pakistan’s elite more critical of America and drones during this period, and that civilian casualties most strongly influenced these opinions. This paper analyzes the rhetoric used in hundreds of English and Urdu Pakistani newspaper articles in order to understand the sentiments of Pakistan’s elite societal members toward America and the drone program. This paper finds that due to several influential factors, particularly civilian casualties, both drone strikes in Pakistan as well as sentiments toward America were discussed in negative, positive, and neutral terms, resulting in a highly multifaceted understanding of Pakistani elite opinion.
Type
Honors thesis
Department
Public Policy Studies
Subject
Anti-Americanism
Pakistani Elite Opinion
Drone Strikes in Pakistan
Permalink
https://hdl.handle.net/10161/9366
Citation
Sawh, Anjali (2015). Anti-Americanism in Pakistan: An Analysis of Pakistani Elite Opinions Regarding the United States and Drone Strikes in 2010. Honors thesis, Duke University. Retrieved from https://hdl.handle.net/10161/9366.
Collections
More Info
Show full item record