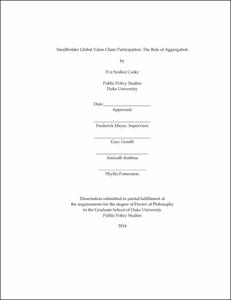 Smallholder farmers have been at the center of the development discourse not only because they represent a significant portion of the world's extreme poor but because of their potential role in food security, climate change and gender equality. Smallholders account for 70% of global food production but most of them in the developing world operate in the informal markets. Market formalization is accelerating even in the least developed countries, however, and formal market channels are gradually displacing informal ones. Global value chain based formal markets may also offer opportunities for smallholders to tap into fast growing international markets for high value agricultural products.

One of the key challenges policymakers, the development community and agribusinesses face, however, is smallholders' limited formal organization ("producer organizations") that aggregate their production and demand for goods and services in order to enable more effective market participation ("aggregation"). Only 5-10% of farmers globally are estimated to participate in formal producer organizations. This is despite the fact that such organizations have been supported by both policymakers and the development field as a way of tackling poverty and addressing market failures.

The shift towards food production being organized based on global value chains and production networks and the fast dissemination of supermarkets and other modern food retail outlets around the world is creating increased need for smallholders to partake in some form of aggregation mechanism in order to become contributors to the global food system.

Agribusinesses that buy agricultural products have therefore also been encouraging producer organizations as a way to improve their ability to source from smallholders. Nonetheless, of the producer organizations that do exist in emerging economies, only a negligible portion have been able to achieve stable access to the growing global market of high value agricultural products.

The objective of this dissertation is to contribute to the understanding of this paradox and to identify factors that may improve the likelihood and effectiveness of aggregation. The structure of this work is as follows: first the research problem and the gap in the literature (Chapter 1) will be defined, followed by the review of existing scholarship on smallholder agricultural producers, the globalization of agribusiness and global value chains as well as the literature on the aggregation of smallholder production, producer organizations and their access to global and modern value chains (Chapter 2).

1. "Collective identity narratives", manifesting themselves in Collective Identity Activities, play an important role in facilitating the growth and competitiveness of POs.

2. Services, including access to financing for farmers, provided by POs play an important role in facilitating scaling.

3. Cooperatives are at a disadvantage compared to other producer organization (PO) forms in achieving the conditions of global value chain access.

The empirical analysis has five main findings. First, because trust is so important in enabling farmer participation in collectives, shared narratives that establish collective identity may play a role in ensuring not only farmer loyalty but also may help improve producer organizations' performance, particularly as organizations grow. Second, organizations that offer more services to farmers are more likely to scale and hence achieve global value chain access. However, this study found that considerable variation among services, some having much more significant relationship to the ability to scale than others. Third, cooperatives, the producer organization form most often supported by policymakers and the development field, on average were found less effective than other forms of producer organizations in their ability to connect farmers to global value chains. Having said that, it is important to highlight that the study also identified several cooperatives and some common patterns among them that outperformed both their cooperative and non-cooperative peers. Fourth, while this study adds to the evidence that smaller farmers within the smallholder group are at a disadvantage when it comes to PO participation and may, therefore, require differentiated support when it comes to interventions, it also identified several POs that work with some of the smallest farmers and still outperform their peers. Fifth, the study found that POs' access to financing is important for modern market access, in addition to meeting quantity and quality requirements.

The policy implications of these findings are considerable and recommendations for interventions conclude the paper (Chapter 6) after the discussion of this study's limitations (Chapter 5). The key policy findings include that cooperatives are not the panacea for development and policymakers should also consider other forms of producer organizations for support. Importantly, policymakers should rather consider linking their support to certain aggregator characteristics and activities, including services offered since some services appear to have stronger relationships than others with POs' ability to succeed. Among these services access to finance for farmers as well as research and development and innovation play crucial role and therefore deserve heightened attention from policymakers while access to finance at the PO level has also been found to be important. In addition, PO activities that help build collective identity are associated with POs' productivity and ability to scale.

In terms of the arguable trade-off between sustainability and smallholder inclusion, a finding of the present work is that smallholders have the potential to achieve significantly higher productivity than their larger counterparts and their POs can successfully access modern markets as long as they are provided with the necessary support related to sustainable intensification of their production and access to capital for making the necessary investments.