Galactokinase is a Novel Modifier of Calcineurin-Induced Cardiomyopathy in Drosophila 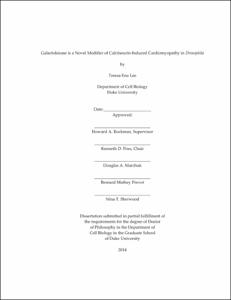 In this study, I generated sensitized <italic>Drosophila</italic> lines expressing constitutively active calcineurin (CanA<super>act</super>) that was either fused to yellow fluorescent protein (YFP) or a Flag epitope (Flag-tagged) specifically in the heart using the cardiac-specific tinC driver (<italic>tinC-CanA<super>act</super></italic>). These sensitized lines displayed significant cardiac enlargement as assayed via optical coherence tomography (OCT), histology, and confocal microscopy. The feasibility of this method was established by testing <italic>Drosophila</italic> expressing deficiency of a known calcineurin modifier, Mef2.

Together, these results characterize <italic>tinC-CanA<super>act</super></italic>-induced cardiac enlargement in the fly, establish that the <italic>tinC-CanA<super>act</super></italic> sensitized line is a reliable model for discovering novel calcineurin regulators and suggest that galactokinase and galectin-regulated glycosylation is important for calcineurin-induced cardiomyopathy. These results have the potential to provide insight into new treatments for cardiac hypertrophy.