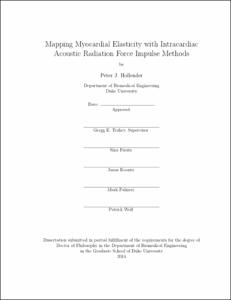 Implemented on an intracardiac echocardiography transducer, acoustic radiation force methods may provide a useful means of characterizing the heart's elastic properties. Elasticity imaging may be of benefit for diagnosis and characterization of infarction and heart failure, as well as for guidance of ablation therapy for the treatment of arrhythmias. This thesis tests the hypothesis that with appropriately designed imaging sequences, intracardiac acoustic radiation force impulse (ARFI) imaging and shear wave elasticity imaging (SWEI) are viable tools for quantification of myocardial elasticity, both temporally and spatially. Multiple track location SWEI (MTL-SWEI) is used to show that, in healthy in vivo porcine ventricles, shear wave speeds follow the elasticity changes with contraction and relaxation of the myocardium, varying between 0.9 and 2.2 m/s in diastole and 2.6 and 5.1 m/s in systole. Infarcted tissue is less contractile following infarction, though not unilaterally stiffer. Single-track-location SWEI (STL-SWEI) is proven to provide suppression of speckle noise and enable improved resolution of structures smaller than 2 mm in diameter compared to ARFI and MTL-SWEI. Contrast to noise ratio and lateral edge resolution are shown to vary with selection of time step for ARFI and arrival time regression filter size for STL-SWEI and MTL-SWEI.

In larger, 6 mm targets, the CNR-resolution tradeoff curves for ARFI and STL-SWEI overlap for ARFI time steps up to 0.5 ms and kernels $\leq$1 mm for STL-SWEI. STL-SWEI can operate either with a 25 dB improvement over MTL-SWEI in CNR at the same resolution, or with edge widths 5$\times$ as narrow at equivalent CNR values, depending on the selection of regression filter size. Ex vivo ablations are used to demonstrate that ARFI, STL-SWEI and MTL-SWEI each resolve ablation lesions between 0.5 and 1 cm in diameter and gaps between lesions smaller than 5 mm in 3-D scans. Differences in contrast, noise, and resolution between the modalities are discussed. All three modalities are also shown to resolve ``x''-shaped ablations up to 22 mm in depth with good visual fidelity and correspondence to surface photographs, with STL-SWEI providing the highest quality images. Series of each type of image, registered using 3-D data from an electroanatomical mapping system, are used to build volumes that show ablations in in vivo canine atria. In vivo images are shown to be subject to increased noise due to tissue and transducer motion, and the challenges facing the proposed system are discussed. Ultimately, intracardiac acoustic radiation force methods are demonstrated to be promising tools for characterizing dynamic myocardial elasticity and imaging radiofrequency ablation lesions.