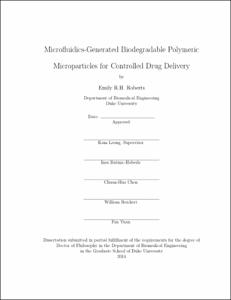 While drug-loaded biodegradable polymer microparticles have found many therapeutic applications, bulk manufacturing methods produce heterogeneous populations of particles. A more highly controlled manufacturing method may provide the ability improve the microparticle characteristics such as the drug release profile. Microfluidic droplet-makers manipulate liquids on the scale of tens of microns and can produce highly regular and controlled emulsions. However, microfluidic droplet manufacturing is not typically designed for clinical translation and the chemicals used are often not biocompatible.