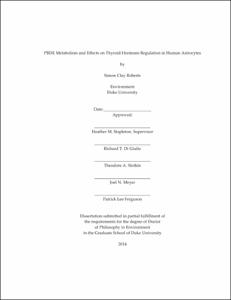 Polybrominated diphenyl ether (PBDE) flame retardants are ubiquitous contaminants in the environment due to their heavy usage in plastics, foam, and textiles to comply with flammability standards from the 1970s through the late 2000s. Due to their toxicity and persistence in the environment, two of the three PBDE commercial mixtures (PentaBDE and OctaBDE) were banned by the Stockholm Convention on Persistent Organic Pollutants in 2009. The DecaBDE commercial mixture, which consists primarily of the fully brominated congener BDE-209, has been banned or phased out in the United States and Europe but is still in use in other parts of the world. Human exposure to PBDEs persists via environmental reservoirs of PBDEs and products produced before the bans/phase-outs. PBDEs disrupt thyroid hormone levels and neurodevelopment in fish and rodents and are associated with altered thyroid hormone levels and neurodevelopmental impairments in humans. However, the mechanism by which PBDEs alter neurodevelopment remains unclear. Knowledge of the mechanisms and molecular targets of PBDEs is necessary for a causal link to be established between PBDEs and neurodevelopmental impairments. The hypothesis of this thesis research is that PBDEs alter thyroid hormone levels in the brain by interfering with the activity of PBDE-metabolizing deiodinase enzymes in brain cells, which may result in decreased levels of thyroid hormones in the brain and impaired neurodevelopment.

In the first aim of this thesis research, the biotransformation of PBDEs was examined to determine whether hydroxylated PBDEs (OH-BDEs) are formed in the human brain. In biotransformation assays performed with human astrocytes, which are cells located at the blood brain barrier, no debrominated or OH-BDE metabolites were identified. The results indicate that the enzyme responsible for PBDE hydroxylation (CYP2B6) was not expressed in sufficient quantities to metabolize PBDEs in the astrocyte cells used in this study, but future studies should analyze the potential for PBDE hydroxylation in other brain cells.

In the second aim of this thesis research, the effects of PBDEs on the thyroid-activating enzyme Type 2 deiodinase (DIO2) were determined in human astrocyte cells. DIO2 converts thyroxine (T4) into triiodothyronine (T3), which is the primary ligand that binds to the thyroid nuclear receptors, and is a very important signaling molecule during neurodevelopment. Cultured primary astrocytes and a human glioma cell line (H4 cells) were exposed to PBDEs and OH-BDEs, and changes in DIO2 activity were measured using liquid chromatography with tandem mass spectrometry (LC/MS/MS). Exposure to BDE-99, -153, and -209, 3-OH-BDE-47, and 5'-OH-BDE-99 all resulted in significant decreases in DIO2 activity in the H4 cells by up to 80% at doses of 500-1,000 nM. Further experiments deduced that the primary mechanism responsible for this decrease in activity was attributed to decreased DIO2 mRNA expression, increased post-translational degradation of DIO2, and competitive inhibition of DIO2. The reduction in DIO2 activity by PBDE and OH-BDE exposures could potentially reduce the concentration of T3 in the brain, which may be responsible for the neurodevelopmental impairments produced by exposure to this class of compounds and needs to be further explored.

In the third aim of this thesis research, the effects of PBDEs and OH-BDEs were examined in the H4 cells and in a mixed culture containing a human neuroblastoma cell line (SK-N-AS cells). The SK-N-AS cells express the thyroid hormone-inactivating enzyme Type 3 deiodinase (DIO3), which works in concert with DIO2 to buffer the concentration of T3 in the brain. Exposure to BDE-99 decreased the concentration of T3 and the inactive thyroid hormone rT3 in the cell culture medium of co-cultured cells by 59-76%. 3-OH-BDE-47 competitively inhibited DIO3 with an IC50 of 19 uM. 5'-OH-BDE-99 increased the rT3 concentrations in cell culture medium by 400%, increased DIO3 activity in exposed cells by 50%, and increased DIO3 catalytic activity in cellular homogenates by over 500%. Further effects on the mRNA expression of several thyroid-regulated genes (DIO3, TR-a, TR-b, MCT8, and ENPP2) and oxidative respiration were also assessed in the SK-N-AS cells. DIO3 mRNA expression increased by 9 fold in cells exposed to 400 nM BDE-99, and ENPP2 mRNA expression increased by 2 fold in cells exposed to 500 nM BDE-99 and a mixture of the three congeners, but no other significant effects on mRNA expression were observed. The basal respiration rates and other parameters of oxidative respiration were also not significantly altered by exposure to PBDEs or OH-BDEs, but proton leak was increased by over 400% in cells exposed to 2 uM 5'-OH-BDE-99.

This was the first study to examine the effects of an environmental contaminant on human DIO2 and DIO3 in cultured cells. The results indicated that BDE-99 and OH-BDEs decreased the activity of DIO2 and 5'-OH-BDE-99 increased the activity of DIO3, which combined would lead to decreased levels of T3 exported from the cells into the extracellular environment. These results provide more evidence that disruption of DIO2 and DIO3 by PBDEs during development may mediate the neurodevelopment effects associated with PBDEs.