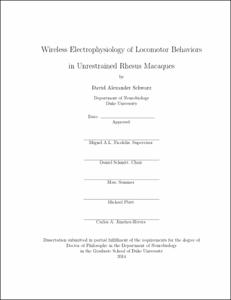 In recent years, large-scale brain recordings in nonhuman primates have been a driving force for both fundamental neuroscience and the field of brain-machine interfaces (BMIs). This required monkey implants connected to external amplifiers and computers with ever increasing number of cables. As shown with our recent demonstration of 2,000 neurons recorded in one monkey, a tethered recording system begins to get bulky and complex, particularly for our BMI and neurophysiological research. To address this problem, we developed a multichannel wireless recording framework. The system was been tested in freely moving rhesus monkey by integrating wireless neural recordings with external computers performing BMI decoding, behavioral manipulanda and optical tracking. This technology can be applied to primate behavior research and, in the near future, wireless, fully implantable human neuroprosthetics, which is of great significance to those suffering from locomotor deficiencies, such as those brought on by spinal cord injury and stroke. Aided with these advances, I was able to study monkeys in unrestrained locomotion while their cortical activity was continuously monitored. I also explored unrestrained behaviors and how they showed distinct transitions in neural dynamics as monkeys engaged in different behavioral activities or learned new motor skills, such as bipedal walking. I was able to decode them many of these behavioral states from cortical activity with neural classifiers. Lastly, monkeys were able to perform BMI tasks continuously for many hours, allowing us to prove the relevance of unrestrained noise in BMI performance. Lastly, I present my role in developing two brain actuated movement platforms, a robotic exoskeleton under the guise of the WalkAgain project, and a microelectrode BMI enabled wheelchair. This body of work should assist those on the path to the next generation of clinical neuroprostheses and neural communication systems.