Characterization of dCDK12, hCDK12, and hCDK13 in the Context of RNA Polymerase II CTD Phosphorylation and Transcription-Associated Events 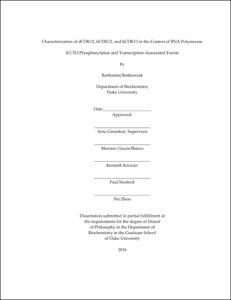 Eukaryotic RNA polymerase II (RNAPII) not only synthesizes mRNA, but also coordinates transcription-related processes through the post-translational modification of its unique C-terminal repeat domain (CTD). The CTD is an RNAPII specific extension of the enzyme's largest subunit and consists of multiple repeating heptads with the consensus sequence Y1S2P3T4S5P6S7. In <italic>Saccharomyces cerevisiae (Sc)</italic>, RNAPII committed to productive elongation is phosphorylated at the S2 positions of the CTD, primarily by CTDK-I (composed of the CDK-like Ctk1, the cyclin-like Ctk2, and Ctk3) the principal elongation-phase CTD kinase in <italic>Sc</italic>. Although responsible for the bulk of S2 phosphorylation <italic>in vivo</italic>, Ctk1 coexists with the essential kinase Bur1 which also contributes to S2 phosphorylation during elongation. In higher eukaryotes there appears to be only one CTD S2 kinase: P-TEFb, which had been suggested to reconstitute the activity of both of the <italic>Sc</italic> S2 CTD kinases. Based on comparative genomics, we hypothesized that the previously-unstudied <italic>Drosophila</italic> CDK12 (dCDK12) and little-studied human CDK12 and CDK13 (hCDK12 and hCDK13) proteins are CTD elongation-phase kinases, the metazoan orthologs of yeast Ctk1. Using fluorescence microscopy we show that the distribution of dCDK12 on formaldehyde-fixed polytene chromosomes is virtually identical to that of hyperphosphorylated RNAPII, but is distinct from that of P-TEFb. Chromatin immunoprecipitation experiments confirm that dCDK12 is present on the transcribed regions of active <italic>Drosophila</italic> genes in a pattern reminiscent of a S2 CTD kinase. Appropriately, we show that dCDK12, hCDK12, and hCDK13 purified from nuclear extracts manifest CTD kinase activity <italic>in vitro</italic> and associate with CyclinK, implicating it as the cyclin subunit of the kinase. Most importantly we demonstrate that RNAi knockdown of dCDK12 in <italic>Drosophila</italic> cell culture and hCDK12 in human cell lines alters the phosphorylation state of the CTD. In an effort to further characterize the transcriptional roles of human CDK12/CyclinK we overexpress, purify to near homogeneity, and characterize, full-length hCDK12/CyclinK. Additionally, we also identify hCDK12 associated proteins via mass spectrometry, revealing interactions with multiple RNA processing factors, and attempt to engineer an analog sensitive CDK12 human cell line. Overall, these results demonstrate that CDK12 is a major elongation-associated CTD kinase, the ortholog of yCtk1. Our findings clarify the relationships between two yeast CDKs, Ctk1 and Bur1, and their metazoan homologues and draw attention to major metazoan CTD kinase activities that have gone unrecognized and unstudied until now. Furthermore, the results suggest that hCDK12 affects RNA processing events in two distinct ways: Indirectly through generating factor-binding phospho-epitopes on the CTD of elongating RNAPII and directly through binding to specific factors.