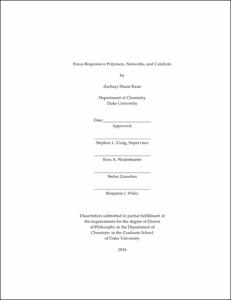 The acceleration of chemical reactions under mechanical stress has been known since the earliest days of polymer science. Once limited to the simple scission of polymer chains, mechanical force can now be used to produce a wide array of productive chemistry. The development of so-called "covalent mechanochemistry," has allowed chemists to challenge and support classically held models of chemical reactivity, impacting both synthetic chemistry and material science. This work aims to develop molecular tools that respond to stress and explore the mechanisms behind that response. While a wide-range of fields may be impacted, the overall inspiration for the work herein is the development of materials with rich and robust molecular responses to otherwise destructive forces. To this end we focus on: (a) developing new mechanochemically reactive organic molecules (mechanophores) that undergo constructive covalent transformations in linear polymers under stress; (b) probing the nature of force transduction across length scales, from bulk (macroscopic) to microscopic stress, in networks thus informing material design; (c) constructing systems that reversibly amplify mechanochemical signals via catalysis.

Force induced transformations of polymer bound mechanophores have the potential to produce a rich array of stress responsive behavior. One area of interest is the activation of non-scissile mechanophores in which latent reactivity can be unveiled. Under the appropriate conditions, this new reactivity could lead to constructive bond formation, and potentially a pathway to mechanochemical stress strengthening. In chapter 2, the mechanical activation of a bicyclo[3.2.0]heptane (BCH) mechanophore is demonstrated via selective labeling of bis-enone products. BCH ring-opening, via a formal [2+2] cycloreversion, produces large local elongation (> 4 Å) and products that are reactive to Michael-type additions under mild conditions. Subsequent photocyclization regenerates the initial BCH functionality, providing switchable structure and reactivity along the polymer backbone in response to stress and visible light.

In chapter 3, the [2+2] cycloreversion of cyclobutane mechanophores is further explored through the development of bicyclo[4.2.0]octane (BCO) mechanophores. Using carbodiimide polyesterification, BCO units were incorporated into high molecular weight polymers containing up to 700 mechanophores per polymer chain. Under exposure to the otherwise destructive elongational forces of pulsed ultrasound, these mechanophores unravel by ~7 Å per monomer unit to form unsaturated esters that react constructively via nucleophilic thiol-ene conjugate addition to form sulfide functionalized copolymers and cross-linked polymer networks. The wide variety of possible product stereochemistry provided an opportunity to probe the dynamics of the mechanochemical ring opening. A series of bicyclo[4.2.0]octane derivatives that varied in stereochemistry, substitution, and symmetry were synthesized and activated. Product stereochemistry was analyzed by conventional NMR and chromatographic means, which enabled inquiry into the mechanism of the mechanochemical [2+2] cycloreversion. These results support that the ring opening is not concerted, but proceeds via a 1,4 diradical intermediate. Additionally, insight is provided into the 1,4-diradical dynamics prior to product formation.

We next turn our attention to the molecular level responses of polymer materials under macroscopic stress. Hydrogels and organogels made from polymer networks are widely used in biomedical applications and soft, active devices for which the ability to sustain large deformations is required. The strain at which polymer networks fracture is typically improved through the addition of elements that dissipate energy, often strong, yet reversible interactions. The result is often tougher materials, resulting from both greater nominal strains and elastic moduli. These materials require extra work to achieve a desired level of deformation, however, there is little evidence that large amounts of energy dissipation is required to achieve greater nominal strains. In chapter 4, we show that the addition of mechanically "invisible" supramolecular crosslinks causes substantial increases in the ultimate gel properties without incurring the added energetic costs of dissipation. We then incorporated a chemiluminescent stress-sensor, the bis(adamantyl)dioxetane covalent cross-linker, first developed in the Sijbesma group, which emits light in the event of covalent bond scission. In these experiments we demonstrate that the occurrence of macroscopic failure (from stress-strain curves) coincides with the molecular level failure of the underlying covalent network.

Finally, in chapter 5, we turn our attention to the development of mechanocatalytic systems. By activating or otherwise altering the activity of a catalyst using force, a single mechanochemical event may be amplified (i.e. by catalyst turnover). Such systems have been previously reported in the form of force-activated polymer bound transition metal complexes. Beyond these on/off systems, we imagine that force may be used to tune catalyst selectivity, via the perturbation of ligand geometry. Here, we report a catalyst that couples a photoswitch to the biaryl backbone of a chiral bis(phosphine) ligand, thus allowing photochemical manipulation of ligand geometry without significantly altering the electronic structure. The changes in catalyst activity and selectivity upon switching can be attributed to intramolecular mechanical forces, laying the foundation for a new class of catalysts whose selectivity can be varied smoothly and in situ over a useful range by controlling molecular stress experienced by the catalyst during turnover. Forces on the order of 100 pN are generated, leading to measureable changes in the enantioselectivities of asymmetric Heck arylations and Trost allylic alkylations.