The Neural Basis of the Number Sense 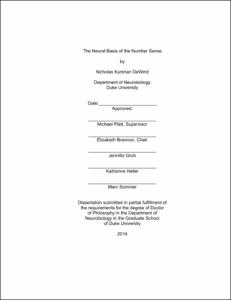 The first is the question of whether the number sense is malleable, and if so, what are the neural correlates of malleability. In Chapter 2 we gave adults number sense training, which we found improved the accuracy of numerical estimation. In Chapter 4 we recorded from single neurons in monkeys while they viewed arrays of items on a computer screen. Similar recordings have been made previously, but usually using monkeys that were trained to discriminate sets based on number. Recordings in trained animals demonstrated that individual neurons in the monkey's brain track the number of items in a set. We reasoned that if the neural correlates of the number sense were altered by the training experience, then we would get different results in untrained monkeys. We did find neurons encoding numerical information in untrained monkeys, but at lower rates than described previously. Thus, we demonstrated that the number sense can improve with experience, and our data suggest that changes in the proportion of neurons encoding number may subserve this improvement.

The second question is how to resolve the problem of stimulus control in laboratory tests of the number sense. Typically, number sense function is assessed by presenting arrays of dots on a computer screen. In such stimuli, however, non-numerical features necessarily covary with numerical features. By counter-balancing different stimulus conditions, it is possible to determine if number and not some other feature is influencing a dependent measure. In Chapter 3, we develop a technique to go further and determine which of eleven stimulus features is influencing a dependent measure.

The third question is whether the intraparietal sulcus (IPS), a brain area known to be engaged during numerical cognition, is specialized for it. To address this question, we apply the technique developed in Chapter 3 to the neural data recorded from monkeys in Chapter 4. We show that the IPS does contain number neurons; however, it also contains neurons that encode many other features in equal proportion, indicating that it is not specialized for number. In Chapter 5, we use drugs injected into the IPS to reversibly inactivate it. We found that after IPS inactivation, performance on a numerical discrimination task was impaired but no more so than a color discrimination control task. Again, our data do not support the theory that the IPS is specialized for numerical processing.