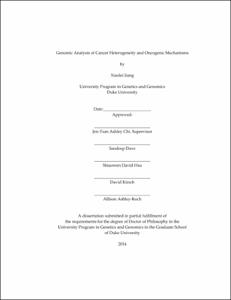 The development of cancer is a process by which an accumulation of genetic changes leads to uncontrolled replication of cells. Since the process of mutation is random, the set of alterations that occur and accumulate during tumorigenesis in one individual is different from that of another. These genetic differences drive tumor heterogeneity. One of the first technologies used to explore genome-wide heterogeneity was the microarray, which can be used to measure the expression of tens of thousands of genes. By exploring differences in expression of not just single genes, but groups of genes that may be altered in one set of tumors compared to another, researchers were able to classify subtypes of cancer that had relevance in disease aggressiveness, treatment, and prognosis. Furthermore, by looking at genome-wide patterns of expression, it is possible to identify specific oncogenic pathways that are activated and critical in driving tumor cell survival, growth, or metastasis. My research utilizes the patterns of expression derived from microarray analyses to study tumor heterogeneity, particularly in response to targeted cancer therapy, and mechanisms of cell death following oncogenic deregulation.

One of the cancer types that has been explored through expression array analysis is B-cell lymphoma. Human aggressive B-cell non-Hodgkin lymphomas (NHL) encompass the continuum between Burkitt lymphoma (BL) and diffuse large B-cell lymphoma (DLBCL), and display considerable clinical and biologic heterogeneity, most notably related to therapy response. We previously showed that lymphomas arising in the E&mu-Myc transgenic mouse are heterogeneous, mirroring genomic differences between BL and DLBCL. Given the clinical heterogeneity in NHL and the need to develop strategies to match therapeutics with discrete forms of disease, we investigated the extent to which genomic variation in the E&mu-Myc model predicts response to therapy. We used genomic analyses to classify E&mu-Myc lymphomas, link E&mu-Myc lymphomas with NHL subtypes, and identify lymphomas with predicted resistance to conventional and NF-&kappaB targeted therapies. Experimental evaluation of these predictions links genomic profiles with distinct outcomes to conventional and targeted therapies in the E&mu-Myc model, and establishes a framework to test novel targeted therapies or combination therapies in specific genomically-defined lymphoma subgroups. In turn, this will rationally inform the design of new treatment options for aggressive human NHL.

The second aspect of my thesis looks at the mechanisms of apoptosis following oncogene deregulation. The Rb-E2F pathway is a critical oncogenic pathway that is frequently mutated in cancers. Alterations in the pathway affect genome-wide expression in the cell, which in turn lead to deregulation of the cell cycle. The E2F1 transcription factor regulates cell proliferation and apoptosis through the control of a considerable variety of target genes. Previous work has detailed the role of other transcription factors that cooperate with E2F to mediate the specificity of E2F function. In this work, we identify the NF-YB transcription factor as a novel direct E2F1 target. Genome-wide expression analysis of the effects of NFYB knockdown on E2F1-mediated transcription identified a large group of genes that are co-regulated by E2F1 and NFYB. We also provide evidence that knockdown of NFYB enhances E2F1-induced apoptosis, suggesting a pro-survival function of the NFYB/E2F1 joint transcriptional program. Bioinformatic analysis suggests that deregulation of these NFY-dependent E2F1 target genes might play a role in sarcomagenesis as well as drug resistance.

Taken together, these studies highlight the importance and power of analyzing genome-wide patterns of expression in investigating cancer heterogeneity, its ability to help predict treatment response, and its role in discovering the mechanisms behind the consequences of gene deregulation.