Regional Differences in Glioma: The Role of Pax3 in the Mechanisms and Cellular Origins of Brainstem Glioma 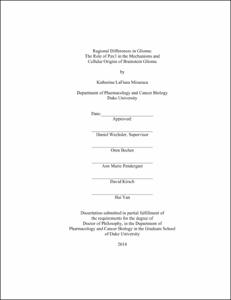 Brain tumors are an incredibly diverse group of neoplasms, as evidenced by their varied locations in the brain, histological characteristics, and genetic alterations. Brain tumor heterogeneity can be potentially explained by distinct oncogenic events or cells-of-origin, or by region-specific intrinsic or extrinsic factors. Brainstem Glioma (BSG) is a particularly deadly brain tumor, afflicting 200-300 children in the United States each year. High-grade BSG (also known as Diffuse Intrinsic Pontine Glioma, DIPG) cannot be surgically removed, and the standard treatment of radiation therapy provides only temporary relief from symptoms. The past 5 years has witnessed a dramatic increase in knowledge regarding the biological basis of this disease along with the realization that BSG is distinct from other more common types of glioma, such as cerebral cortex glioma (CG). It was the goal of this study to investigate the regional differences in gliomas arising in the brainstem versus the cerebral cortex, using mice as a model system, and to begin to understand the contributions of the various possible sources of heterogeneity.

In doing so, we have uncovered region-specific gene expression patterns in these two types of pediatric gliomas that are apparent even when the initiating genetic alterations and cell-of-origin are kept constant. Focusing on the <italic>paired box 3</italic> (Pax3) gene, which is expressed at higher levels in BSG than CG, we have found that Pax3 expression not only characterizes mouse BSGs driven by PDGF signaling, Ink4aARF-loss, p53-loss, and H3.3-K27M expression, but also identifies a novel subset of human BSGs that are associated with <italic>PDGFRA</italic> alterations and wild type <italic>ACVR1</italic> and that commonly harbor <italic>TP53</italic> alterations and the H3.3-K27M mutation.

As Pax3 plays a pro-tumorigenic role in other types of cancer, we hypothesized that Pax3 expression contributes to the brainstem gliomagenesis process as well. By utilizing mouse models, we found that Pax3 inhibits apoptosis and promotes proliferation of Nestin-expressing brainstem progenitor cells <italic>in vitro</italic> and enhances PDGF-B-driven BSG <italic>in vivo</italic>. Furthermore, we speculate that Pax3 expression may be a marker for Wnt pathway activation in BSG, which is targetable via pharmacologic agents. Indeed, a subset of Wnt inhibitors tested effectively slowed the growth of BSG cells <italic>in vitro</italic>, however cross talk with the Shh pathway might indicate that dual Wnt and Shh inhibition is necessary.

In addition, the regional expression pattern of Pax3 in gliomas correlates with its expression in normal murine brain development, leading us to hypothesize that Pax3 progenitor cells in the neonatal brainstem can serve as a cell-of-origin for BSG. We discovered that targeting Pax3 progenitors with PDGF-B overexpression and Ink4aARF- or p53-loss induces high-grade BSG that physiologically resemble the human disease. This novel and distinct model of BSG may be utilized in the future for preclinical studies.

The identification of Pax3 as a regional marker of mouse and human BSG has led to the discovery of a novel subset of the human disease, the identification of a novel oncogene contributing to pathogenesis, and the characterization of a novel cell-of-origin with the potential to give rise to the disease. This information contributes significantly to the current understanding of the mechanisms and cellular origins of BSG, and will hopefully instruct future investigations into how to better treat this disease.