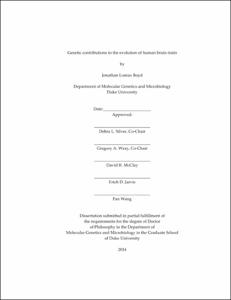 The neocortex expanded spectacularly during human origins. That expansion is thought to form the foundation for our cognitive faculties underlying abstract reasoning and socialization. The human neocortex differs from that of other great apes in several notable regards including altered cell cycle, prolonged corticogenesis, and massively increased size. However, despite decades of effort, little progress has been made in uncovering the genetic contributions that underlie these differences that distinguish our species from closely related primate, such as chimpanzees. A subset of highly conserved non-coding regions that show rapid sequence changes along the human lineage are candidate loci for the development and evolution of uniquely human traits. Several studies have identified human-accelerated enhancers, but none have linked an expression difference to a organismal traits, such as brain sizes. Here we report the discovery of a human-accelerated regulatory enhancer (HARE5) near the Wnt receptor FRIZZLED-8 (FZD8). Using a variety of approaches, we demonstrate dramatic differences in human and chimpanzee HARE5 activity, with human HARE5 driving significantly strong expression. We show that HARE5 likely regulates FZD8 and that expression differences influence cell cycle kinetics, cortical layers, and brain size. At present, this would provide the first evidence of a human-chimpanzee genetic difference influencing the evolution of brain size.