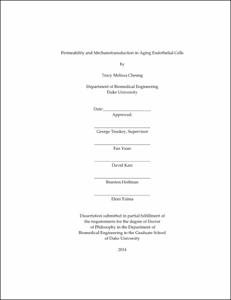 Complications from cardiovascular disease, such as a heart attack or a stroke, represent the leading cause of death in the United States and many developed and developing countries. Atherosclerosis is the primary pathology underlying cardiovascular disease. It is caused by an increase in endothelial cell (EC) permeability, leading to the buildup of cholesterol and lipids which form the atherosclerotic plaque. Accelerated aging in regions of atherosclerosis contribute to the development and progression of the disease. The global hypothesis that motivated this research was that activation of deacetylase antioxidant regulator, Sirtuin1 (SIRT1), improved function in senescent endothelial cells ECs by increasing the integrity of cell-cell junctions. In turn, this led to elevated EC permeability, a decline in the response to shear stress, and elevated traction forces.

Aging of hCB-ECs significantly increased permeability due to changes in tight junction protein localization and phosphorylation. Activation of SIRT1 significantly reduced permeability in aged hCB-ECs and restored junction integrity. ECs under flow also exhibited changes in cell junctions with increasing age. Aged hCB-ECs were less responsive to shear stress, exhibiting lower levels of atheroprotective genes, KLF2 and eNOS. Activation of SIRT1 in aged hCB-ECs restored the response to shear stress by altering localization and phosphorylation of adherens junction protein, VE-cadherin. The endothelial glycocalyx is a layer of proteoglycans and glycoproteins on the surface of ECs that is important in maintaining EC barrier function. In aging ECs, the glycocalyx was thinner and less dense. However, activation of SIRT1 restored the structure of the glycocalyx, suggesting that the positive effect of SIRT1 on elevated permeability in aged hCB-ECs may also be due to restoration of the glycocalyx. Aged hCB-ECs also exhibited elevated traction forces for measurements done with single cells, cell clusters (2 to 3 cells), and cell monolayers (20 to 30 cells). The elevated traction forces correlated with altered actin localization and increased actin filament thickness. Activation of SIRT1 reduced traction forces and decreased actin stress fiber thickness in aged hCB-ECs, suggesting that the effects of SIRT1 on cell-cell junctions alters binding of junction proteins to the actin cytoskeleton and generation of cell traction forces. Together, these results implicate an important role for SIRT1 in regulating permeability and mechanotransduction in aging endothelium.