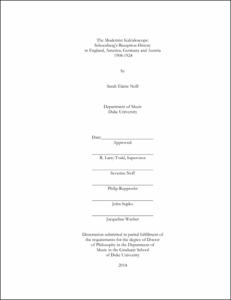 Much of our understanding of Schoenberg and his music today is colored by early responses to his so-called free-atonal work from the first part of the twentieth century, especially in his birthplace, Vienna. This early, crucial reception history has been incredibly significant and subversive; the details of the personal and political motivations behind deeply negative or manically positive responses to Schoenberg's music have not been preserved with the same fidelity as the scandalous reactions themselves. We know that Schoenberg was feared, despised, lauded, and imitated early in his career, but much of the explanation as to why has been forgotten or overlooked. As a result our own reception of Schoenberg's music is built upon inherited fears, hopes, and insecurities that are now nearly a century old. In order to more fully approach these musical works and their composer it is necessary to attempt to separate his reputation from the sound of the music.

This dissertation, which studies Schoenberg's reception from 1908 through 1924 in the United States, Britain, and Austria and German through select works (Opp. 10, 15, 16, 17), contributes to the field by uncovering additional primary sources, including previously unknown performances and reviews. My work interacts with larger trends in musicology, including questioning the narrative of atonality, assessing the value of social and artistic movements (i.e. expressionism) as applied to music, and examining how the reception of a work is the combination of many factors - from the aural to the political - which intertwine to form our idea of a musical text. Ultimately, through a study based on close musical analysis employing elements of set-class theory, the methodology of Rezeptionsästhetik, and a focus on historical context, I present an interpretation in which Schoenberg's reception is strongly determined by early critical responses from Vienna, where conservative views of music's role in society combined with undercurrents of anti-Semitic thought to brand Schoenberg as mentally unstable and his music as socially detrimental.