The Longest Transference: Self-Consolation and Politics in Latin Philosophical Literature 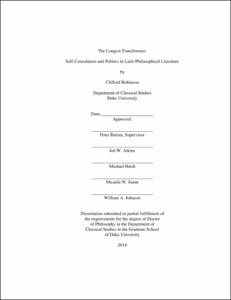 This dissertation identifies Cicero's <italic>Consolatio</italic>, Seneca's <italic>Ad Polybium de consolatione</italic>, and Boethius' <italic>De consolatione Philosophiae</italic> as self-consolations, in which these Roman authors employ philosophical argument and literary art, in order to provide a therapy for their own crippling experience of grief. This therapeutic discourse unfolds between two contradictory conditions, though, since the philosophers must possess the self-mastery and self-possession that qualifies the consoler to perform his task felicitously, and they must lack those very same qualifications, insofar as their experience of loss has exposed their dependence upon others and they thus require consolation. Foucault's theoretical treatment of ancient philosophical discourse is supplemented by Lacanian critical theory and the political theology of Giorgio Agamben to perform analyses of the consolatory texts and their political context. These analyses reveal that self-consolation overcomes the contradictory conditions that found this discourse through literary and rhetorical artifice. But this resolution then places the apparent completeness of the philosophical argument in doubt, as the consoled authors in each case finally call for a decisive action that would join philosophical reflection to the merely human world that philosophy would have these consolers leave behind. Each author's self-consolation therefore demonstrates a split allegiance to the Roman political community and to a Socratic philosophical heritage that advocates for withdrawal from politics.