Beyond Measure: Whiteness in the Twenty-First Century 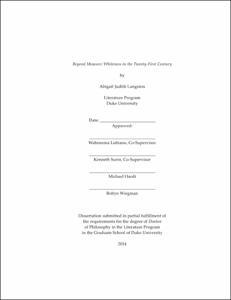 In spite of a host of early twenty-first century claims regarding the dawn of a "post-racial" or "anti-racial" era, race remains an important problem for understanding contemporary power. This dissertation provides a genealogical examination of the multiple forms and functions that comprise white raciality in the twenty-first century United States. Situating whiteness in relation to the social and financial circuitry of neoliberal globalization, I contend that it is an inextricable component of an emergent mode of governmentality. A critique of scholarly work in and around Whiteness Studies conditions the theoretical interventions of the project as a whole and grounds my argument for a new framework of analysis.

Following the work of Michel Foucault, I investigate the development of a novel form of whiteness whose undergirding logic functions not by differentiation but by way of similitude. Instead of emphasizing and enforcing exclusions upon difference, this `sympathetic' form of raciality works to neutralize and recuperate it. Finally, via Gilles Deleuze and Félix Guattari, I discuss the necessity of reimagining race ontologically as well as epistemologically, and confronting its collusion with other forms of power in order to analyze the risks that the flexibilization of whiteness poses--to subjects living under its rule and to its own conditions of existence.