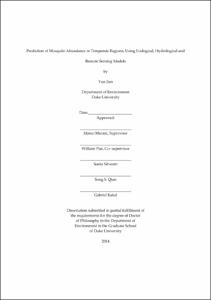 New and old mosquito-borne diseases have emerged and re-emerged in temperate regions over the recent past, but an understanding of mosquito population dynamics, a fundamental step toward disease control, remains elusive. In particular, we are still lacking reliable predictive models of mosquito abundance in temperate areas due to the subtle links between the fluctuation of mosquito population and highly heterogeneous environmental drivers. Hence, this doctoral dissertation presents an interdisciplinary approach towards an improved understanding and prediction of the fluctuations in mosquito abundance in temperate regions. In the first part of this dissertation a hierarchical Gompertz-based model is used to assess the relative importance of endogenous (density dependence) and exogenous (environmental forcings) controls and their interactions in regulating the dynamics of a West Nile Virus vector (Culex pipiens) in the Po River delta in Italy. The results clearly detect the effects of density-dependence in the observed population dynamics for the mosquito species analyzed and highlight the controls exerted by environmental forcings and habitat conditions. Subsequently, the characteristic scales of temporal variability in mosquito populations, and the representativeness of observations at different sampling resolutions, are investigated using a 10 year daily mosquito sample from Brunswick County, North Carolina. The species present in the sample (among which Aedes vexans and Culiseta melanura are addressed in greater detail, as vectors of East Equine Encephalitis and West Nile Virus) are investigated using a combination of time series analysis, individual based simulations, and density-dependent modeling approaches. Significant population fluctuations with characteristic periodicity between 2 days and several years are found in response to different regulation mechanisms. In particular, the observed fast fluctuations are importantly determined by a varying mosquito activity, rather than by reproduction/mortality processes, driven by rapid changes in meteorological conditions. Finally, in the third part of this study, a state space reconstruction (SSR) approach is used to understand how the predictability of mosquito abundance varies with aggregation time scale and with the prediction horizon, and how much can the prediction of mosquito abundance be improved by using daily observations compared to the commonly used once-per-week samples. The results show that the predictability of mosquito abundance decreases as the time scale of the models increases from one week to one month, while the predictability of per capita growth rate increases together with the modeling scale. It is also shown that the prediction of mosquito per capita growth rate can be improved using daily abundance observations. Furthermore, many mosquito models compare the observed and predicted abundance as a measure of model performance. However, my results suggest that short term forecasts of mosquito abundance may appear to have a significant capability due to the positive autocorrelation between abundance in subsequent time steps, even when the model's ability to predict the abundance change is low. Model capability should thus be evaluated comparing observed and modelled per capita rates of change.