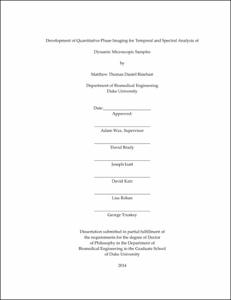 Microscopic objects such as biological cells produce only minor modulation in the intensity of transmitted light, leading many researchers to add exogenous contrast agents for image enhancement. However, cells and other semitransparent objects that have not been chemically modified impart phase delays to the transmitted electromagnetic fields, which can be measured using interferometric microscopy methods. In this dissertation, instrumentation and methods are developed to investigate the spatiotemporal dynamics and spectral signatures of individual cells and semitransparent polymer film samples.

An off-axis quantitative phase microscope is applied to (1) quantitatively image the two-dimensional refractive index distributions of microbicide films undergoing hydration and compare effects of thickness and composition on dissolution dynamics, and (2) investigate the morphological and volumetric changes of individual RBCs undergoing mechanical flow stresses in <italic>in vitro</italic> models of capillaries. The quantitative phase microscope is further modified to capture high-resolution hyperspectral holographic phase and amplitude images. This novel hyperspectral imaging system is applied to compare the sensitivity of phase-based and amplitude-based spectral quantification of optically-absorbing molecules, and then used to measure spectroscopic changes in RBCs that take place during infection by <italic>P. falciparum</italic> parasites.

Measurements of an object's optical volume, which is defined as a novel metric for characterizing objects whose refractive index and thickness profiles are not known a priori. The composition and thickness of microbicide films are both found to impact spatiotemporal dissolution kinetics. A comparison of fluorophore concentration determination by amplitude and phase spectra indicates that both methods of quantification have comparable sensitivity, and that the two may be combined to improve the precision of quantity determination. Both optical volume and hemoglobin mass measurements are seen to decrease in cells infected by <italic>P. falciparum</italic>, although the two metrics are only loosely correlated. Finally, RBCs flowing through in vitro capillary models exhibit large changes in optical volume when deforming in response to mechanical stresses, which is attributed to a combination of cytosolic volume changes as well as conformational changes in the intracellular protein configuration.

These results demonstrate the applicability of QPM as a tool for evaluating (1) microbicide film performance, (2) spectroscopic changes in infected individual RBCs, and (3) novel biophysical changes observed in RBCs under mechanical stresses.