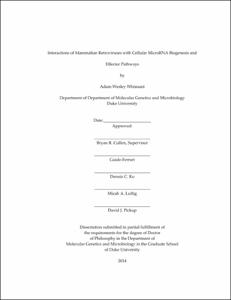 The cellular microRNA (miRNA) pathway has emerged as an important regulator of host-virus interactions. While miRNAs of viral and cellular origin have been demonstrated to modulate viral gene expression and host immune responses, reports detailing these activities in the context of mammalian retroviruses have been controversial. Using modern, high-throughput small RNA sequencing we provide evidence that the spumaretrovirus bovine foamy virus expresses high levels of viral miRNAs via noncanonical biogenesis mechanisms. In contrast, the lentivirus human immunodeficiency virus type 1 (HIV-1) does not express any viral miRNAs in a number of cellular contexts. Comprehensive analysis of miRNA binding sites in HIV-1 infected cells yielded several viral sequences that can be targeted by cellular miRNAs. However, this analysis indicated that HIV-1 transcripts are largely refractory to binding and inhibition by cellular miRNAs. In addition, we demonstrate that HIV-1 exerts minimal perturbations on cellular miRNA profiles and that viral replication is not affected by the ablation of mature cellular miRNAs. Together, these data demonstrate that the ability of retroviruses to encode miRNAs is not broadly conserved and that lentiviruses, particularly HIV-1, have evolved to avoid targeting by cellular miRNAs.